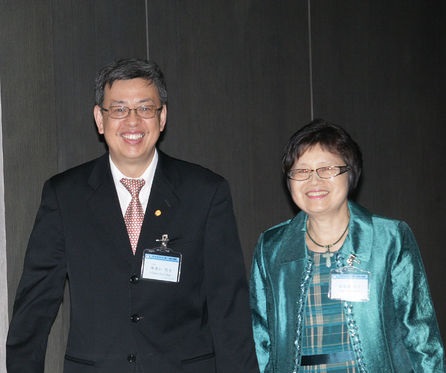 Rumors about the Democratic Progressive Party presidential candidate Tsai Ing-wen’s running mate flared up again Friday. The media reported that Tsai is very likely to choose Academia Sinica Vice President Chen Chien-jen as her campaign partner in January’s election. Chen has been regarded as a hero for leading the health ministry successfully in combating SARS at the time of its severe outbreak.

During a visit to Taichung’s technology park, Tsai did not deny the rumor but only said that the name of her running mate will soon be announced. The source was quoted as saying by the Chinese-language Apple Daily that Tsai would announce her running mate next week.

The rumors were swirling three months ago that presidential frontrunner Tsai has asked Perng Fai-nan, governor of Taiwan’s central bank, to serve as her running mate in the January election. Perng was invited for his strong reputation for economic professionalism around the world and in local society. Perng reportedly declined the offer due to family objections. Another possible candidate includes Lin Chuan, the head of the Thinking Taiwan Foundation think tank and the former finance minister, who showed no interest in vying for this position in a media interview in late July.

According to the media, Chen could be invited as Tsai’s running mate for his good social reputation and his high level of professionalism in biotechnology and health. Chen’s strong leadership in different organizations is also considered.

Chen has served in several government positions including the Director General of the Division of Life Sciences (1997-1999) and Deputy Minister of the National Science Council (2002-2003), Minister of the Department of Health (2003-2005), and Minister of the National Science Council (2006-2008). After his outstanding leadership in controling the outbreak of severe acute respiratory syndrome (SARS) successfully in 2003, he led organizational change at the Department of Health and Center for Disease Control, the Medical Care System for Infectious Diseases and the Act of Infectious Disease Control in Taiwan.

According to the latest poll released by the Taiwan Indicators Survey Research (TISR) on Thursday, 46.2 percent of those polled would vote for Tsai if the election was held tomorrow, while the Kuomintang’s Eric Chu would receive 20.4 percent support, and 10.4 percent for People’s First Party James Soong.