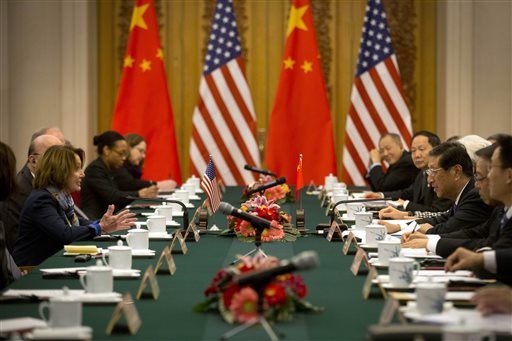 BEIJING (AP) — U.S. House of Representatives Minority Leader Nancy Pelosi has led a delegation on a rare trip by foreign politicians to Tibet, during a visit to China that included meetings with officials in Beijing.

Pelosi, the former House speaker, has been a frequent critic of China's human rights record, including in the remote Himalayan region where Beijing is accused of suppressing demands for greater religious and cultural freedoms.

She was asked about her Tibet trip during a meeting Thursday with Zhang Ping, a vice chairman of the Chinese parliament, but her response was inaudible to journalists in the room. The Tibet visit was not announced in advance.

Pelosi made no direct reference to Tibet In her opening comments at the meeting with Zhang at the Great Hall of the People, the seat of the legislature in the heart of Beijing.

"We consider (the meeting) an important one, to be with your distinguished colleagues, as we increase our relationship between the two Congresses and we'll talk about our two countries as well and the success of the presidents' meetings," Pelosi said.

The visit by Pelosi and six other Democrats was intended to focus on boosting trade ties, along with talks on national and cyber security, climate change and human rights.

Pelosi has been outspoken on the issue of human rights throughout her nearly 30 years as a Democrat representing California in Congress. She last traveled to China in 2009.

Some of Pelosi's strongest comments on Tibet came during a March 2008 visit with the Dalai Lama at the headquarters of his self-declared government-in-exile in the northern Indian town of Dharamsala. She then called for an international probe into deadly anti-government riots in the Tibetan capital of Lhasa earlier in the month. It had triggered unrest in many ethnically Tibetan regions across western China in the days that followed.

"If freedom-loving people throughout the world do not speak out against China's oppression and China and Tibet, we have lost all moral authority to speak on behalf of human rights anywhere in the world," Pelosi said.

Since the 2008 riots, Tibet has been largely off-limits to foreign media and diplomats, and travel there by ordinary foreign tourists requires a special permit. During sensitive political dates, such as the anniversary of the riots, visits are even more tightly restricted.

Details about the length of the delegation's visit to Tibet and its agenda were not immediately available.

China refutes accusations of human rights abuses in Tibet, claiming instead to have brought development to what it describes as a backward theocracy prior to the arrival of communist forces in 1950. The Dalai Lama fled to India in 1959 amid an abortive uprising against Chinese rule and is shunned by Beijing as a die-hard separatist.

Pelosi's most recent trip to China comes amid questions about Chinese hacking attempts on American corporate intellectual property, as well as tensions over U.S. challenges to Chinese territorial claims in the South China Sea.

Pelosi was joined by Democratic Reps. Jim McGovern of Massachusetts, Betty McCollum and Tim Walz of Minnesota, Joyce Beatty of Ohio and Alan Lowenthal and Ted Lieu of California.