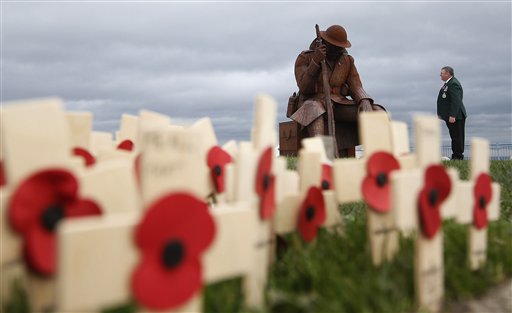 November 11 is not only the “bare branches day” where billion dollars sale are made within a day in China because of crazy discount, it is a memorial day since the end of World War I that commemorates the members of armed forces who have died in the line of duty.

Remembrance Day is observed on the 11th of November because it was the day the Armistice of Compiègne was signed between the Allies and Germany in 1918. It is also known as the Armistice Day. World War I, also known as the Great War, was the first total war in the history of the western world. It was also the first widespread use of chemical warfare in which destructive 20th century technology made the Great War one of the deadliest conflicts in the history. As the result of the war, 9 million combatants and 7 million civilians died, 7 million were permanently disabled, and 15 million were seriously injured.

When mentioned the Great War, two iconic symbols stand out: the poppy and the poem, “In Flanders Field”. In Canada, the moment of Remembrance begins with the bugling of “Last Post” immediately before 11:00am. Then often a reading of the fourth verse of the 'Ode of Remembrance' and two minutes silence at 11 am. Often, the ceremony is completed with a choir singing the poem, “the Flanders Field” and afterwards, people pay their respects by placing their artificial poppies at the foot of the monument. Poppy, a potent symbol of WWI and remembrance throughout the Commonwealth and many other countries, came from the war poem, “In Flanders Field,” which describes the poppies grow in the Flemish graveyard where the soldiers were buried.

Remembrance Day is a significant memorial event which the silence began at the 11th hour of the 11th day of the 11th month - the time in 1918 when the guns fell silent along the Western Front in Europe, reported BBC News. Nowadays, all the veterans of the First World War have passed away. The last surviving veteran of WWI, Florence Green, passed away at age 110 in 2012.

“The Flanders Field” - Lieutenant-Colonel John McCrae
In Flanders fields the poppies blow
Between the crosses, row on row,
That mark our place; and in the sky
The larks, still bravely singing, fly
Scarce heard amid the guns below.

We are the Dead. Short days ago
We lived, felt dawn, saw sunset glow,
Loved and were loved, and now we lie
In Flanders fields.

Take up our quarrel with the foe:
To you from failing hands we throw
The torch; be yours to hold it high.
If ye break faith with us who die
We shall not sleep, though poppies grow
In Flanders fields.