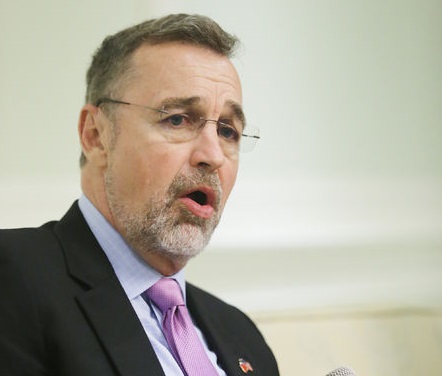 'One China' should be reviewed: congressman

The United States should review the “One China policy” as it deprives Taiwan from participating in international organizations, Matt Salmon said, chairman of the Subcommittee on Asia and the Pacific of the U.S. House Committee on Foreign Affairs.

“China's political stance on Taiwan's involvement in the international community is ‘silly’ and is not in the best interests of the world stage,” he said, adding that the country has a lot to offer in that respect.

The visiting congressman held a press event with the local media in Taipei on Tuesday, where he expressed his views about the island’s bid to the U.S.-led Trans-Pacific Partnership (TPP) and his government’s commitment to providing Taiwan with arms of a defensive character.

“I call on the U.S. government to raise arms sales to Taiwan for the maintenance of peace and stability across the strait,” he said.

Commenting on Taiwan’s bid to the TPP, Salmon reiterated his support for the country to join the trade bloc, urging the U.S. government to do more to "booster Taiwan's credibility and status on the world stage."

In a bill introduced by the congressman that backed Taiwan's participation as an observer in Interpol, it was successfully passed by the House of Representatives on November 2, he said.

"Now it's gone to the Senate. I believe it will be very successful."

Speaking on Taiwan’s international isolation, Salmon said Taiwan has suffered way too many injustices when it comes to being involved in world organizations, adding that he wishes to change all that.

“Taiwan has a lot to offer that can help shape the world,” he stressed.

The congressman also lauded the democracy in Taiwan as a great example for the whole Asia-Pacific region, an asset he hopes to see reach to the people of China in future, he concluded.