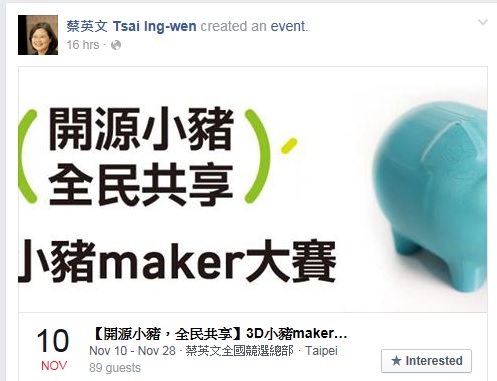 Tsai responded with a comment in the morning saying “Taiwan is a democratic country,” adding that she will continue to voice the controversy surrounding the summit between President Ma Ying-jeou and Chinese President Xi Jinping in Singapore last weekend.

Taiwanese netizens supporting Tsai’s cause were quick to return critics of their own, calling on the Chicoms not to meddle with Taiwan’s politics and election campaigns.

“Is Facebook allowed in China?” an undisclosed supporter questioned.

In the speck of the heated debate between netizens from both sides, some even capped jokingly that Facebook is only “available for a limited time only in China,” saying the Chicom trolls are best remained restricted.

In China, where the Internet is highly censored and professional news organizations are often extensions of the government, the average citizen has limited access to information. Hence, Internet users in China often circumvent government censorship to access popular American websites, including Facebook.

Rather than deleting these derogatory messages off her Facebook page, Tsai said she will leave them to show people on the other side of the strait that Taiwan is a democracy where the freedom of speech is guaranteed and that everyone is entitled to voice their opinion.