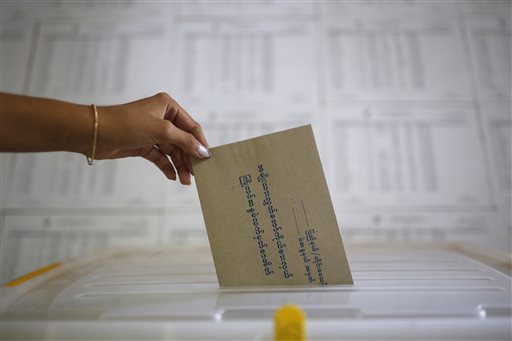 It was a touching and historic moment for the people in Myanmar as they witnessed their victory to democracy on Monday. The scene of celebrations from supporters of opposition party leader Aung San Suu Kyi was broadcasted to the entire world, just a day after the disputed Ma-Xi talks held in Singapore Saturday.

For those paying attention to Myanmar’s election in Taiwan, they will find both ruling parties USDP and KMT share one thing in common – apathy towards people’s suffering and being plagued with internal upheaval. Myanmar’s parliamentary speaker Shwe Mann was ousted from his role as party chairperson amid a power struggle three months ahead of the election.

Shwe Mann had been rumored to be discussing an alliance with opposition leader Aung San Suu Kyi, who was sent to leave on August 13, according to the local media.

Aung San Suu Kyi's party retained its confidence Monday as it won a landslide victory in Myanmar's elections, leaving rivals representing the junta-backed USDP that ruled this Southeast Asian nation for a half-century far behind.

In Taiwan, the special Kuomintang congress in mid-October named party chairman Eric Chu by acclamation as its new presidential candidate after a vote to replace its original candidate, Legislative Vice Speaker Hung Hsiu-chu. Hung was said to be ousted from the role as the runner for her China policies and performing poorly in opinion polls, rating only 15 percent sometimes or worse, as much as 30 percentage points behind opposition Democratic Progressive Party Chairwoman Tsai Ing-wen.

Suu Kyi has said she will act as the country's leader if the NLD wins the presidency, saying she will be "above the president." It was not Suu Kyi’s first victory in election, however. The Myanmar junta, which seized power in a 1962 coup, annulled the results when Suu Kyi's party won a sweeping victory in 1990 elections.

Experts assumed that the election will not create a fully democratic Myanmar in the upcoming years, which ended a half-century of military rule in 2011. The constitution reserves 25 percent of parliamentary seats for the military, and was rewritten to keep Suu Kyi from the presidency, according to the media.

Leading by a large margin in opinion polls, Tsai is widely seen as poised to become Taiwan's first female president in the upcoming January election. The expected landslide victory for Tsai and for her party at the Legislature is projected to put an end to the long political confrontation and economic failures under the Ma administration over the last seven years.


(Sterling Hsiao is a teaching assistant in a business college in Taipei who is a firm believer in method and enjoys reading South Asian diasporic literature.)