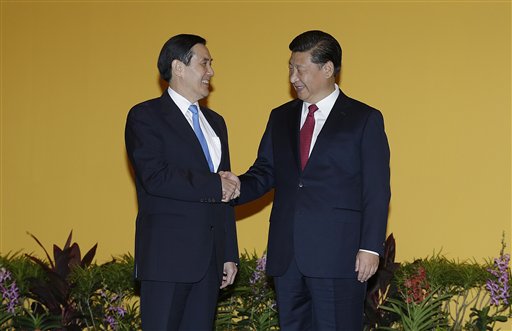 After 66 years, Ma proposes hotline at opening summit with Xi

TAIPEI (Taiwan News) – President Ma Ying-jeou and Chinese leader Xi Jinping shook hands for more than a minute Saturday at their historic summit in Singapore, with the Taiwanese president proposing a cross-straits hotline.
The summit at the Shangri-La Hotel’s Island Ballroom was the first such meeting since the Communists wrested control of China from the Kuomintang, which fled to Taiwan in 1949. Hundreds of reporters jostled for places to take pictures of the handshake, which started at 2:59 p.m. in front of a huge orange screen.
The two leaders waved to the crowds of journalists after the handshake and then proceeded to another part of the location to hold the talks, which were expected to last about one hour. Both leaders were wearing similar blue suits and shirts, but Ma wore a blue tie, Xi a red one.
After the delegations took their places, Xi spoke first, mentioning the positive results of peace over the past seven years. As agreed, he addressed President Ma as “Mister Ma.”
“Today is a very important day, the leaders of the two sides of the Taiwan Straits are meeting, turning a new page in cross-straits relations,” the Chinese president said. Only because of the reforms of the past seven years, he said, alluding to Ma’s period in power, had it been possible to organize the summit.
Xi described the people of China and Taiwan as sharing the same blood, and went on to name the “1992 Consensus,” saying it was the right direction, which would lead to a deepening of cross-straits exchanges.
In his five minutes responding to Xi’s opening comments, Ma referred to the “separate development” of the two sides since 1949, while he mentioned the 23 agreements signed during his term and the 8 million annual travelers between both sides.
Ma said he was proposing five items: strengthening the “1992 Consensus,” reducing confrontation, expanding bilateral exchanges, setting up a cross-straits hotline between the Mainland Affairs Council and the Taiwan Affairs Office, and promoting more mutual assistance.
The meeting was scheduled to be followed by news conferences by Taiwan Affairs Office chief Zhang Zhijun and President Ma respectively.
After a joint dinner, Ma was expected to fly back to Taiwan.
The Taiwanese delegation also included Mainland Affairs Office Minister Andrew Hsia and his deputy, Wu Mei-hung, Presidential Secretary-General Tseng Yung-chuan and his deputy, Hsiao Hsu-tsen, National Security Council Secretary-General Kao Hua-chu and national security adviser Chiu Kun-suan.