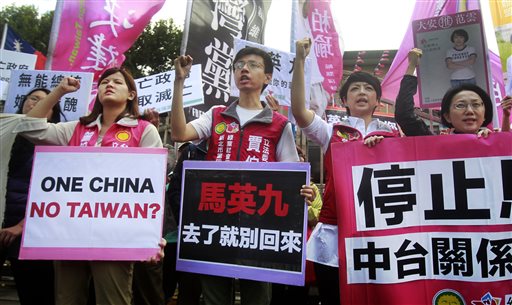 No national consensus reached as the historic meeting unravels

China's Xi Jinping and Taiwan's Ma Ying-jeou are the first leaders from the two sides to meet since both parties parted during the Chinese civil war in 1949. Ma is the successor to Chiang Kai-shek, whose Nationalists retreated to the island, while Xi now leads Mao Zedong's victorious Communists, who set up government in Beijing, reported Associated Press. According to Kuomintang, the planning for the meeting began two years ago, despite President Ma Ying-jeou has promised in 2011 that he would not meet the leader of China if he was re-elected as the president of the Republic of China, Taiwan. He justified his previous statement, saying “I said I would not meet with China’s President in mainland China. But now, Singapore is a different country and I did not say I would not meet him there.”

Before the meeting, Taiwan Affairs Office of the State Council PRC and the ruling government have begun to communicate the context of the meeting. China wishes to reaffirm the “One China” policy in the meeting while Ma’s government wants to advocate the “1992 consensus”. The opposition party, the Democratic Progressive Party (DPP), said Ma should safeguard Taiwan’s sovereignty and he should not recognize the “One China” policy that claims Taiwan as part of People’s Republic of China.

Since last night, protestors gathered outside of the Taipei Songshan Airport and Legislative Yuan. It was estimated at least 500 people were present. Protesters chanted “Stop the Black Box Ma-Xi Summit!” There were also other demonstrators gathered outside the Taiepi Songshan Airport, where President Ma Ying-jeou departed by flight on November 7. “It is also known that there are demonstrators, in fact, en route to Singapore by plane drawn from post-Sunflower activist groups Democracy Tautin, Dreamdom, and Restoration of Taiwan Social Justice. These three groups also seem to be the main organizers of the large-scale rally planned for this afternoon, though as the situation is still fluid, it remains to be seen whether demonstrators will in fact divert to Songshan Airport,” reported New Bloom. The demonstrators and the police clashed when 30 to 40 protestors tried to charge into Legislative Yuan. Pro-China supporters led by an ex con, White Wolf, were also at the scene.
It seems absurd to people who support Ma’s pro China policies that people protested against the historic summit. New Bloom provides an explanation, “if political power accrues in the hands of politicians who then decide that they do not have to answer to the people, it may be that the best and only way of the Taiwanese people to demonstrate that Ma Ying-Jeou’s actions do not represent the popular will of the Taiwanese people is through protest. And it is in this sense that we will see protest actions today, as the expression of the will of the Taiwanese people.” The news of Ma-Xi Summit did not come into the light just a few days before the meeting. The transparency of the summit, arrangement and context is questionable. DPP said they do not oppose meeting with the leader of China but it should be transparent, no political premises and on equal footing.