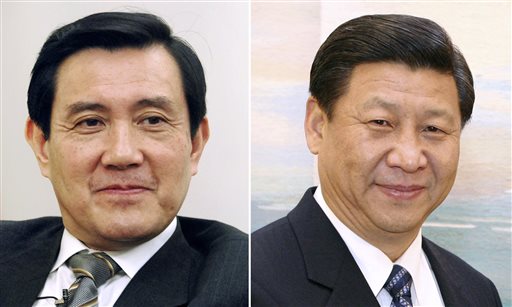 President Ma Ying-jeou arrived in Singapore at 10:30 morning Saturday, ahead of a historic meeting with Chinese President Xi Jinping later in the day. Ma said before his departure from Taipei that he hopes the two leaders will take stock of bilateral relations in the past few years and look to the future. It is also hoped that the meeting will help solidify peace across the Taiwan Strait and maintain the status quo.

Despite the celebration among Kuomintang and pro unification supporters, Taiwanese remain skeptical of Ma’s intention and grow wary of China’s unification ambitions. With the 2016 presidential election drawing closer, the influence of Ma Xi Summit is questionable and perhaps unavoidable. So what are various views on the meeting?

“The meeting may well burnish Ma’s personal legacy and also fit Xi’s grand strategy of friendly diplomacy. But within the context of cross-Strait relations, while China may not aim at directly influencing the upcoming elections, it does have something to say about future cross-Strait ties. The Ma-Xi meeting is a platform for China to send a last warning to Taiwan’s leaders before a new Taiwanese president assumes office in May: the significance of upholding the “1992 consensus,” a verbal agreement between the KMT and the CPC to keep the concept of “one China” but accept strategic uncertainty surrounding its precise definition, in order to maintain cross-Strait ties. Commenting on the upcoming meeting, Zhang Zhijun, head of China’s Taiwan Affairs Office, underscored that the one-China principle, the essence of the 1992 consensus, has been the foundation for the “pragmatic arrangement” in the cross-Strait relations for the past seven years. China’s bottom line is clear: as long as Taiwan’s leaders accept the one-China principle, the peaceful development of the cross-Strait ties can be maintained,” commented by Emily S. Chen on The Diplomat.

A writer on Foreign Policy believes the meeting could penetrates Taiwan’s soft power to mainland China and help China on its way to democracy. “Even if the meeting creates a backlash in Taiwan, it could reverberate among party cadres in China. Chinese liberals in the Communist Party already see Taiwan as a possible force to nudge the mainland toward democracy. An influential Chinese academic told me how he thinks reunification could work on the political level: The Chinese government would evolve into a political body with two houses, similar to the U.S. Congress. Mainland China would dominate one house, whose members would be elected from each Chinese province and from Taiwan by population. The other house would be made up equally of mainland Chinese and Taiwanese. Unlikely, yes — but a sign of how the dream of Taiwan’s absorption stimulates creative political thinking in the Chinese body politic.”

“The meeting comes as Taiwan is campaigning for elections in January. The constitution obliges Mr Ma to step down next year but his party, the Kuomintang (KMT), which once ruled all of China, appears to be heading for a humiliating defeat in the presidential vote and possibly in simultaneous polls for the legislature. The risk is that Mr Ma may make a desperate last-minute effort to revive the KMT’s battered fortunes by playing the peacemaker, while lacking the gumption to stand up for his island state. If Mr Ma is not to fuel cross-strait tensions, he needs to make it clear to Mr Xi that the search for lasting peace must involve the DPP. Insisting, as Communist Party officials do, that the DPP must first embrace the notion of “one China” is a recipe for added tension in a region already seething with it. In the interests of his country, Mr Ma must be resolute. He will finish his presidency with rock-bottom approval ratings. Standing firm would at least add to his legacy.” reported the Economist.

As the concerned Taiwanese and the world watches, the historical meeting unfolds.