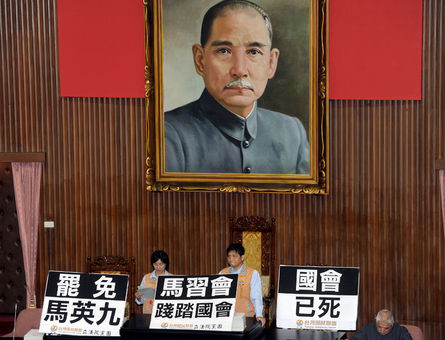 TAIPEI (Taiwan News) – President Ma Ying-jeou was unlikely to present a report about his meeting with Chinese leader Xi Jinping to the Legislative Yuan after the opposition Democratic Progressive Party rejected the idea Friday.
The unprecedented cross-straits summit will take place in Singapore on Saturday afternoon, and the ruling Kuomintang had proposed inviting Ma for a rare address to the Legislative Yuan, possibly next week.
However, during negotiations between the caucuses Friday morning, the DPP expressed its opposition, saying the speech would merely amount to political manipulation and the Legislative Yuan should not allow itself to bear responsibility for Ma’s secretive organization of the summit.
DPP legislative caucus whip Ker Chien-ming slammed the president for failing to inform the Legislative Yuan of his summit plans beforehand, and for then wanting lawmakers to play along.
The DPP caucus also wanted Ma to publicly reject statements from China about “One China,” while he should also refuse to discuss topics such as the “One China Framework,” “One Country Two Governments,” “One Country, Two Areas,” military confidence-building procedures, a peace agreement, and temporary political solutions.
Ma did not have the right to make a single promise, or to stick Taiwan within a certain framework for the future, Ker said.
The opposition has been fearful that Ma, who is leaving office next May, will make promises that will bind his successor, most likely DPP Chairwoman Tsai Ing-wen.
The DPP motions about limiting Ma’s range of discussion topics still have to be discussed at caucus negotiations before they can be approved, but the KMT is unlikely to do so, reports said.