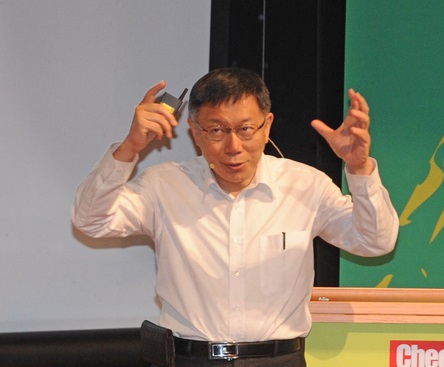 Ko: nothing to worry in Ma-Xi meeting

President Ma Ying-jeou’s plan to normalize future meetings between two leaders of the strait is still too early to tell, as there would be no second chance if the first round of talks turned out to be sour, Taipei Mayor Ko Wen-je said Thursday.

“I wouldn’t worry about the first Ma-Xi meeting. I’m guessing all they will do is grab a meal together, and then snap a few photos,” Ko joked.

Commenting on Ma’s sudden announcement of his upcoming meeting with Chinese President Xi Jinping, Ko said the president should have announced the meeting earlier, as it is a major national affair.

“The real concern should instead be what happens after Ma steps down, what shoddy deals he will make with Beijing without the knowledge of others.”

When asked about whether the president has hurt Taiwan’s democratic values on the basis of non-transparency, as suggested by Democratic Progressive Party’s Tsai Ing-wen, Ko however said the situation is not that serious.

“The notion of a Ma-Xi meeting has been talked about for several years, and it is bound to happen. The question was when,” Ko said.

Regarding Ma’s dissemination about the pledge not to meet with Xi during his time in office, the mayor said decisions will change depending on circumstances, however noting that as long as he has apologized, the public should just let it pass.

Asked to comment on the likelihood that Ma requests China to withdraw their missiles pointed at Taiwan, Ko said: “I’m pretty sure all they will do is have a meal together and snap a few shots for the sake of publicity,” adding that the serious discussions will not happen this time round.

On a concern that the Ma-Xi meeting could put Taiwan’s future in a frame, and pose difficulties on future cross-strait dialogue between Beijing and possible soon-to-be-elected Tsai, Ko however remarked that the assumption is totally preposterous.

“Even parents can’t watch over their grown-up son. How can Ma ever have the power to manipulate them in future?” he countered.