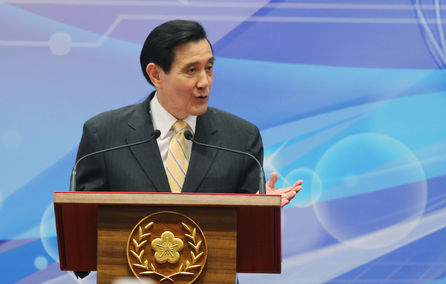 “I have no idea what she is talking about,” Ma refuted.

Ma, who held a press conference in the morning to address his upcoming summit in Singapore, slammed a local press reporter for bringing up the critic in which Tsai labeled the trip as “hurting Taiwan’s democracy.”

On Wednesday evening, Tsai condemned Ma Ying-jeou for planning the trip in a precipitated and secretive manner, saying it is harmful to Taiwan’s democratic values as the public is not well informed prior to his official announcement. She also condemned the planning process as a “black box” affair that lacks transparency and openness.

The meeting, the first in seven decades between top leaders from both sides, has been a topic of controversy as an early-morning opinion poll conducted by the Chinese-language Apple Daily showed that 53.10 percent of the public do not support the Ma-Xi summit, while 8.09 percent were undecided on the subject.

Tsai also voiced the suspicion that political motives played a role in the timing of the event. Ma’s Kuomintang is widely predicted to lose the January 16 presidential and legislative elections to the DPP, with opinion polls showing Tsai leading KMT Chairman Eric Chu by as much as 25 percent.