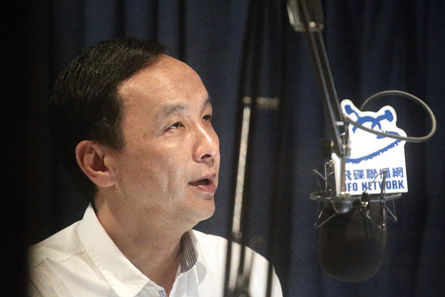 Chu: Wang is not unhappy

Kuomintang Chairman and presidential candidate Eric Chu remarked during a radio talk show Monday morning that Legislative Speaker Wang Jin-pyng is not unhappy, stressing there was no tension or misunderstanding between them.

Chu downplayed speculations that the two have gone their separate ways as they have not been seen together during the party’s campaign efforts in the last few weeks.

“The presidential election is still two and a half months away, whether Wang chooses to join in on our campaign is a matter of personal decision,” he said.

When asked if he perceives Wang as an ally or a foe, Chu said there was no discrepancy between them, as he has always viewed and respected the political senior.

Chu denied any discord with Wang, and that the friction the latter has (or had) with former president Lee Teng-hui, PFP Chairman James Soong or President Ma Ying-jeou is an issue that remains between the elders.

“It’s an old feud from the last generation for which I didn’t play a part,” he responded.

Chu again appealed to the public to put an end to speculation about not seeing eye to eye with Wang.

Looking at the big picture, Chu said he will do his utmost as KMT chairman to bring party members together despite the challenges he is faced with.

“It’s time to put one’s selfish thought and opinions aside for the sake of party unity and integrity,” he said.

Asked what would Wang get in return for helping out with the KMT’s election campaigns, Chu said the party meeting last week is a proven testament that Wang is an indispensible leader in parliament, and that he has an important role to play in the ongoing legislative campaigns.

Last Friday, Chu threw his support behind Wang’s potential speakership bid, as dozens of KMT lawmakers launched a signature drive calling for the latter to be placed on top of the party’s list of legislator-at-large candidates.

The KMT chairman said he believes Wang, who has served as a legislator for four decades and legislative speaker for 18 years, would continue to fight alongside the party for the Republic of China.

Speaking on if Wang’s assistance in the election campaigns has come a tad bit too late, Chu however responded that the timing is about right, saying the legislative speaker could do a lot to attract public support in central and southern Taiwan.

Seen largely as Chu’s premeditated move to call on Wang at a time when the upcoming elections are barely three months away, the presidential candidate however overturned such notion, blaming the local media for over-speculation.

“There are a lot of hearsays within the KMT about the stalemate between me and Wang. But the truth is that we are getting along just as fine.”