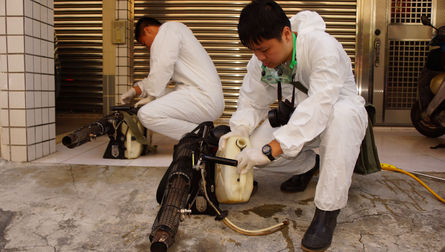 Dengue in K-town remains at peak

The outbreak in Taiwan’s southern port city is still in its peak as daily cases of the mosquito-borne disease have failed to show signs of relenting, the CDC said.

Compared to Kaohsiung, the situation in neighboring Tainan appears to be improving, it said.

As of Saturday, Tainan had reported 56 new cases, but that was 35 fewer than the figure it reported on the same day last week.

The number of accumulated confirmed cases there now stands at 21,744, out of a total of 29,329 cases nationwide, CDC data showed.

However, the endemic continues unabated in neighboring Kaohsiung city, where it showed an increase of 30 cases from the same day last Saturday.

The CDC added that while 129 patients had died from the mosquito-borne disease in Taiwan, 30 remain under intensive care units and 26,999 have recovered.

While majority of the public anticipates the approaching winter, residents in Kaohsiung and Tainan have high hopes that the cooler climate could help wipe out the dengue epidemic.

Health authorities however urged the public to remain vigilant despite the slight drop in temperature expected in the coming few days, as the eradication of mosquito larvae can only be achieved through the removal of stagnant water and upkeep of a cleaner environment.