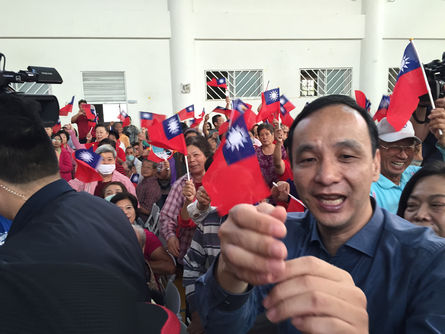 Kuomintang presidential candidate Eric Chu coined his election campaign slogan “ONE Taiwan,” a move which he said aims to bring unity and solidarity amongst the people, reports said Sunday.

“Unity is strength,” Chu quoted in his Facebook page, saying that in his past experience, endorsing the right campaign slogan could not be done without much debate and back-and-forth discussions. But this time around the decision was an instant click.

“When I had a list of slogans placed in front of me to choose from, I knew it had to be this one,” he wrote.

The presidential contender said simple words such as “unity, strength and action” led him to reflect on the economic and social challenges the island has had to face in the last few years. “Amid relentless criticisms and party infighting, we failed to stick together to find solutions for our troubles,” he explained on social media.

Chu said it is time to turn the tide, adding that the KMT is ready to face the challenges ahead and it is not backing down an inch.

“Let us bind our hearts together for the future of ONE Taiwan, where unity, strength and action will help us propel toward that goal,” Chu concluded.