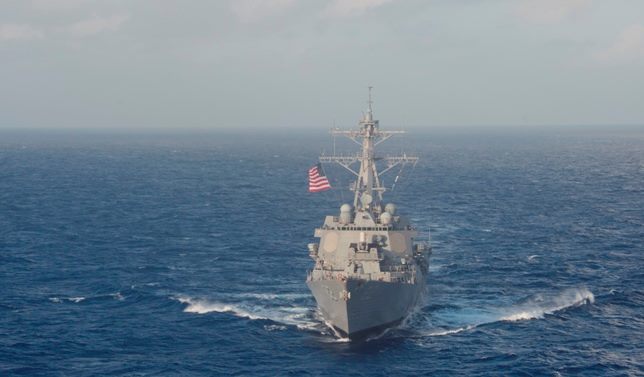 Taiwan reiterated its determination Friday to defend its sovereignty over South China Sea islands and surrounding waters after an international arbitration panel ruled that it could hear a case brought by the Philippines against China over disputed territory in the region.

"The Republic of China government's determination to defend the country's sovereignty and maritime rights over the four island chains in the South China Sea is not open to question," said Ministry of Foreign Affairs spokeswoman Eleanor Wang.

The ministry is closely following developments in the case and will respond as necessary, she said.

The Permanent Court of Arbitration in the Netherlands ruled on Thursday that it has jurisdiction to hear the case, in which the Philippines argues that China's nine-dash line territorial claim over South China Sea waters is unlawful under the United Nations Convention on the Law of the Sea.

The Philippines filed the case before the tribunal in The Hague in 2013 to seek a ruling on its right to exploit the South China Sea waters in its 200-nautical mile exclusive economic zone (EEZ) as allowed under the U.N. Convention.

Taiwan is taking an interest in the case because its sovereignty claims in the region are similar to China's, with both dating back to a multi-dash line broached in 1947 when the mainland was still under the control of the Republic of China (ROC).

The ROC moved its seat of government to Taipei after Nationalist forces led by Chiang Kai-shek were defeated in the Chinese civil war and retreated to Taiwan in 1949.

But both the ROC and People's Republic of China maintain the sovereignty claim based on the U-shaped line that encompasses the vast majority of the South China Sea.

In Thursday's ruling, the Permanent Court of Arbitration based in The Hague rejected Beijing's claim that the disputes were about territorial sovereignty and said additional hearings will be held to decide the merits of the Philippines' arguments.

Both the Philippines and the United States, a treaty ally of the Philippines, welcomed the ruling, but China has boycotted the proceedings and insisted that the panel has no authority to rule in the case.

The Permanent Court of Arbitration is an intergovernmental organization with 117 member states, including China and the Philippines. It was established in 1899 to facilitate arbitration and other forms of dispute resolution between states.

Taiwan controls one of the Pratas Islands and one of the largest of the Spratly Islands -- Taiping Island.

Although Taiwan is not a contracting party to the United Nations Convention on the Law of the Sea, the ROC government has urged parties concerned to respect international laws, including the U.N. convention.