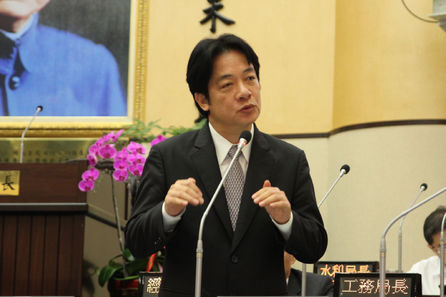 TAIPEI (Taiwan News) – Tainan City Mayor William Lai received an official reprimand Friday for boycotting the Tainan City Council, but he was not removed from office.
The Control Yuan impeached him, meaning his case was referred to the Committee on the Discipline of Public Functionaries, which could have sacked him as mayor. The committee on Friday announced it was giving Lai a reprimand.
The senior Democratic Progressive Party politician and the members of his city administration boycotted sessions of the council during the first part of the year in a protest against its speaker, Lee Chuan-chiao of the Kuomintang, who was accused of vote-buying.
When the Control Yuan, the nation’s highest government watchdog body, announced its decision to impeach Lai, the mayor said it was punishing the wrong person, since it was Lee who had damaged the reputation of his office.
Lai first leveled the accusations of vote-buying at Lee when the latter was unexpectedly elected speaker last December 25 despite the presence of a DPP majority on the council.
Two investigations later opened, one into alleged vote-buying during the November 29 local elections, during which Lee was first elected to the council, and one into the speaker election.
In the first case, a Lee campaign aide was indicted, but the latter case has still not resulted in any major breakthroughs. Lee has been accused of trying to slow down the investigation by taking leave to attend council sessions.
The Committee on the Discipline of Public Functionaries said Friday that as the mayor of a special municipality, Lai should respect the laws on local government and should have attended the council meetings. The KMT criticized him for not showing respect to the democratic system.
Lai gave up his boycott after the Control Yuan decision as an outbreak of dengue fever was also plaguing the city.