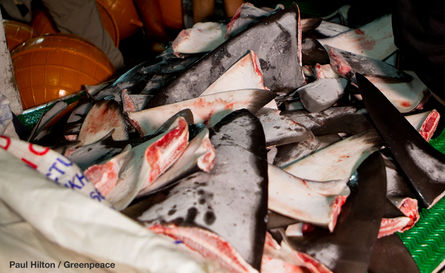 Greenpeace reported in early September that a Taiwanese fishing vessel, the Shuen De Ching No. 888, was illegally harvesting shark fins and throwing the bodies of the sharks into the sea near Papua New Guinea in the South Pacific. The European Commission issued a yellow card to Taiwan on Oct. 1, a precursor to import ban and a risk of being identified as an uncooperative country in the fight against "illegal, unreported and unregulated" fishing.

Greenpeace said Taiwan's Fisheries Agency sent officials to check on the Shuen De Ching after the ship's return to Taiwan and found that it had falsely recorded its fish catch, cut fins off sharks and thrown their bodies into the sea, and violated the ban on fishing for black sharks. The Taiwan Fisheries Agency (TFA) has suspended the license of the flagged fishing vessel, confiscated its catch and the vessel’s owner is expected to pay a NT$150,000 fine.

“The TFA’s penalty is inadequate and lower than the penalties imposed by other countries on vessels that have been caught fishing illegally. This sends the message that illegal Taiwanese fishing vessels, if caught, will only get a slap on the wrist,” said Ning Yen, Greenpeace East Asia Oceans Campaigner, adding that “Internationally, it is the norm that illegal fishing fines are up to five times the value of the catch. The penalties imposed on this ship are nowhere near this, and are unacceptable. Furthermore, Greenpeace activists found evidence that transshipment of catch had taken place on the SD888, which the TFA has yet to fully investigate.”

Greenpeace and the general public doubt the transparency and effectiveness of TFA’s management and pointed out that the penalty is outdated. Greenpeace warned that Taiwan’s billion dollar fishing industry will take a blow if Taiwan cannot make structural improvements within that time frame. Based on its annual fish exports to the EU, the import ban could cost Taiwan about NT$520 million (US$16.1 million) a year.

Yen stressed that reforming Taiwan's deep-sea fishing system is urgent, noting that if Taiwan does not improve within six months, it will face trade sanctions, seriously affecting Taiwan's international profile and diplomatic ties.

Taiwan’s fishing industry has been under the fire in recent years, from BBC’s story of the exploitation of migrant workers to the recent illegal fishing scandals. Taiwan has the largest fishing fleet, around 1,300 vessels operating in the Pacific, and reforms within its fishing industry regulations, management and operations is a pressing issue.