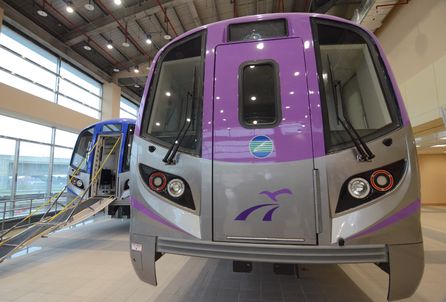 Deputy Minister of Transportation and Communications (MOTC) Wu Meng-feng disclosed Wednesday that it had already inked a memorandum of understanding (MOU) with the Taoyuan City government concerning the scheduled launch of the rapid transit line connecting Taiwan's main airport and the greater Taipei area.

“We haven’t given up on our goal,” Wu said, expressing hope that mechanical problems on the airport MRT could be solved before its due launch in March 2016.

Initially set to start operations by the end of this year, the project has been experiencing system instability since March, when related system stability work should have already been completed.

On Tuesday, Taoyuan Metro Corp. President Ho Nuan-hsuen responded to reporters that he has 50 percent faith in the scheduled launch although the rail's stability has been improving recently.

According to the deputy minister, of the 43 criteria needing improvements, 42 have been accomplished, while its engineers are working to resolve the last issue.

When asked about Ho’s skepticism towards the launch date, Wu however responded Wednesday that it must have been a misinterpretation of the latter’s words by members of the local press.

“I’m sure what the president meant was that there was 50 percent room for improvement,” Wu stressed.

Again asked if the project's contractors would be fined if there was another possible delay, the deputy minister however said the details of the penalties would remain with the Bureau of High Speed Rail rather than the MOTC.