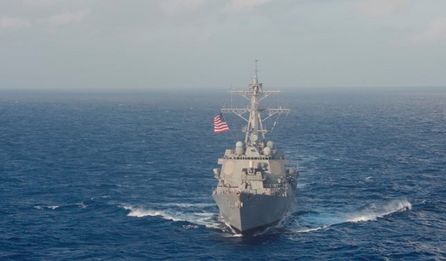 Minister of National Defense (MND) Kao Kuang-chi pointed out Wednesday that it is monitoring the buildup of tensions in the South China Sea, calling for all parties to work out a resolution to maintain peace and stability across the region.

Kao’s response came during a question-and-answer session at the legislature in the morning, where he stood to present the ministry’s report on the provisional regulations for its all-volunteer military composed mainly of career professionals.

According to Tuesday’s reports, the United States Navy sent a guided-missile destroyer, the USS Lassen, within 12 nautical miles of China’s Subi Reef in the Spratly Islands, a move condemned by Beijing as illegal trespassing.

The defense minister however refused to elaborate on what would be Taiwan’s response should the tension results into a military confrontation between the U.S. and China.

“We shall abide by the five-point initiative to call on all the claimants to exercise restraint, safeguard peace and stability in the sea area, and refrain from taking any unilateral action that might escalate tensions,” he said.

According to MND’s 2015 National Defense Report published on Tuesday, China has been upgrading its major weapons systems and building up the People’s Liberation Army (PLA) as part of its goal to have a strong enough fighting force to attack Taiwan by 2020.

With regard to allegations that an unnamed military boot camp has been using canned coffee in lieu of real grenades for cadets during training, and the corrosion scandal related to the Army’s newly-acquired Apache attack helicopters, Kao however responded that Premier Mao Chi-kuo is set to make a public announcement later in the day.