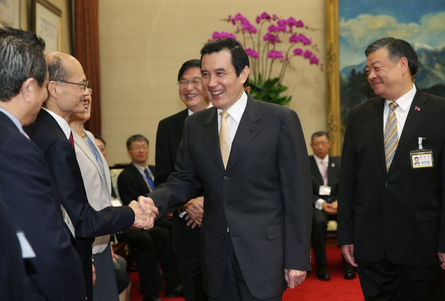 “There are those that criticize incessantly about our widening wealth gap, but the fact is we have done a lot to narrow the rich-poor divide over the years,” Ma said during an official reception at the presidential office on visiting delegates from the Sino-American Certified Public Accountants Association (SACPAA).

The president said he has helped promote the island’s prosperity, international diplomacy and peaceful resolution across the strait since assuming office seven years ago.

Under his administration, he went on to say that the government has endeavored to bring Taiwan’s economic growth rate to 3.77 percent last year, the highest among the Asian tigers.

“The strong showing last year put the country back at the head of the group of four successful economies for the first time since 2000,” Ma reiterated.

When compared to other economic powerhouses around the world, Taiwan’s private wealth ranking surpassed the likes of Singapore, Hong Kong and South Korea in a recent “World Wealth Outlook” report compiled by Credit Suisse Group AG, according to the president.

“I couldn’t believe my eyes when I first saw the report, but then the results speak for themselves.”

While majority of the public agree that the rich-poor divide has widened over the years, Ma instead pointed out that Taiwan’s income gap is not serious relative to other countries in the world, suggesting that narrowing the income gap is one of his administration's most significant achievements.

“The average annual disposable income of Taiwan's top 20 percent income-earning households was 6.39 times that of the bottom 20 percent in 2010, whereas the disparity has narrowed to 3.98 as of last year,” he said.

According to Ma, pursuing social justice in the civil society has always been the doctrine of Sun Yat-sen, the founding father of the Republic of China.

“Narrowing the distribution of wealth has always been our utmost priority,” he told the visiting delegates on Monday.