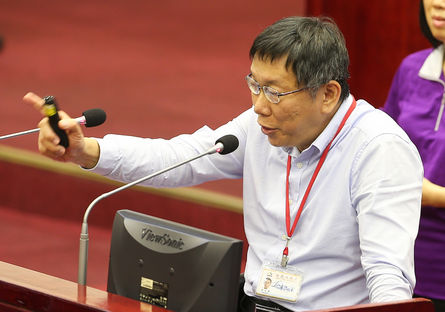 Taipei Mayor Ko Wen-je disclosed Monday that he will be inviting the nation’s presidential candidates for an open forum on November 17 to discuss their views on the possible relocation of the city’s Songshan Airport.

According to the Chinese-language Economic Daily News, the Taipei City government has since refused to review the NT$20 billion (US$667 million) Build-Operate-Transfer (BOT) investment plan to renovate the airport, an overdue project which the Civil Aeronautics Administration (CAA) said it considers passing onto the Executive Yuan to be scrapped.

The project was initially carved out by then-Taipei mayor Hao Lung-bin and the Ministry of Transportation and Communications (MOTC) to expand the airport with new shopping stores, accommodations, and conference centers, according to reports.

Since assuming office in late December last year, Ko said in an earlier report that it would be more practical to examine the expansion and renovation of Songshan Airport until the topic of its future is discussed.

Taipei’s previous mayors have proposed relocating Songshan airport outside the city due to safety concerns, aircraft noise and restrictions on urban planning, but all proposals have been deferred. The expansion project was consequently brought up under Hao’s administration.

“We will leave the subject at hand for the future president to decide,” Ko said, adding that he will be inviting all three candidates from the Kuomintang, People’s First Party, and Democratic Progressive Party for a public discussion due November.