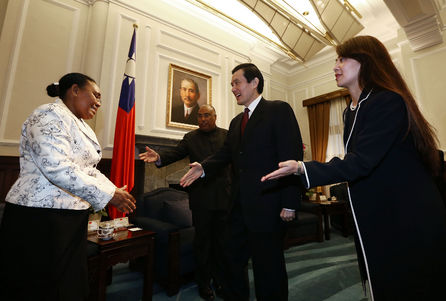 Taiwan’s allies to the U.N. on state visit

The Ministry of Foreign Affairs (MOFA) announced Monday that a group of permanent representatives to the United Nations whose countries retain diplomatic relations with the Republic of China have arrived in Taiwan for a six-day visit.

According to the foreign ministry, the visiting delegation will meet with President Ma Ying-jeou and local officials, including Legislative Speaker Wang Jin-pyng, Environmental Protection Administration Minster Wei Kuo-yen, Vice Minister of Foreign Affairs Vanessa Shih, Council of Agriculture (COA) Deputy Minister James Sha, and authorities from the Ministry of Transportation and Communications, and the National Science and Technology Center for Disaster Reduction.

Earlier this month, 16 of the 22 total diplomatic allies of the R.O.C. have voiced their support for Taiwan's participation in U.N.-related agencies such as the World Health Organization (WHO) and the International Civil Aviation Organization (ICAO), as well as the U.N. Framework Convention on Climate Change (UNFCCC).

However, some of Taiwan’s remaining allies did not mention the R.O.C. in their addresses to the General Assembly, including the Vatican, Honduras, Nicaragua, El Salvador, Panama and the Dominican Republic.

The delegation is scheduled to stay in Taiwan through Friday, where there will also render visits to the National Museum, the World Vegetable Center (AVRDC), and Southern Taiwan Science Park.