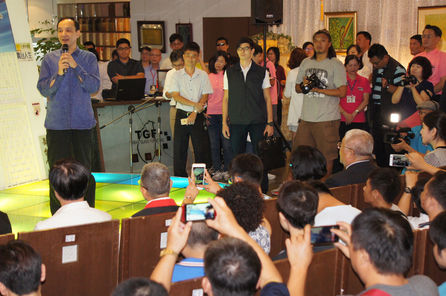 Chu says he is not cutting ties with Ma

Kuomintang presidential candidate Eric Chu denied allegations that he was cutting ties with President Ma Ying-jeou, stressing that the focus should instead be on efforts to introduce better, improved government policies for the future of Taiwan, reports said Sunday.

“Chu has to let the public know that he is a different player,” the article quoted, adding that it would be Chu’s downfall if he followed Ma’s political agenda.

In a bid to win back public support, the KMT presidential contender has been trying to prove that Hung's "one China, same interpretation" goes against the KMT's cross-strait policy.

When asked if his relationship with Ma has come to a standstill, Chu said although his views may differ from that of the president, he was only trying to direct Taiwan into the right course, as exemplified through his proposed plans to revise the government’s 12-year compulsory education policy if elected – an initiative which was carved out by Ma.

Again asked if he was aware that People First Party Chairman James Soong has accused the KMT of sidelining the intent to collaborate between the two parties, Chu however downplayed the allegations that he was not willing to work with the PFP, stressing that he still has profound respect for the PFP leader.

In an opinion poll revealed Saturday by Want Want China Times Group, Tsai still led 38.9 percent of the popular vote, while Chu, who only became his party’s candidate last October 17, trailed with 21.8 percent and Soong finished a distant third with 8.8 percent.