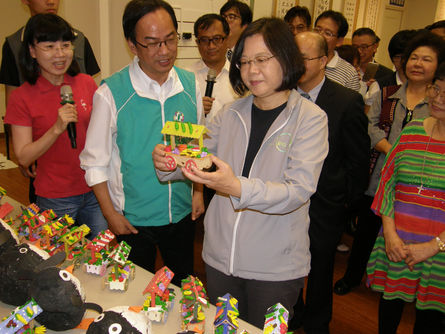 Earlier on Thursday, KMT Chairman and presidential contender Eric Chu blasted Tsai and her counterparts for using “dirty tricks” against him, expressing that he will do whatever necessary “to keep the opposition party from ruling.”

Furthermore, Chu criticized the DPP that the public would not support negative campaign tactics.

When asked about her sentiment over Chu’s rhetoric, Tsai responded that the KMT can jump from one candidate to another, but its smearing efforts remain the same.

“Chu has been laying criticisms on the DPP for a week now, it’s getting old,” Tsai said, adding that the KMT has since lost its public appeal because of its aptitude towards placing blames rather than finding solutions.

“After nearly eight years in power, the public has lost complete faith in the KMT. It’s about time the party contemplates on its failure.”

Tsai made the remarks during a supporters’ gathering in Chiayi County on Sunday morning in the company of DPP legislative candidate Chen Ming-wen.