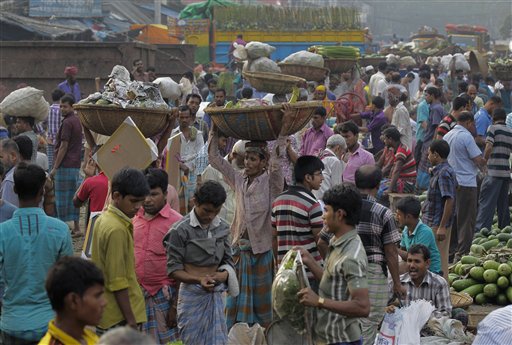 Police say the incident took place at Huseni Dalan, an important 17th century center of learning for the minority Shiite community, where 25,000 people had gathered in the old part of Dhaka.

Local police chief Aziz Ahmed said a 12-year-old boy died, and that the injured were being treated.

Nobody claimed the responsibility for the attacks. At least five bombs were thrown, police said. Three exploded and two were recovered.

Shiite Muslims are a minority in the Sunni-dominated country, but they are generally not discriminated against. Attacks against Shiites are virtually unheard of.

"Given the nature of attacks, I think this has been done to create chaos in the country. It is a sabotage," said Dhaka's senior police official Asaduzzamn Mia.

The procession was meant to commemorate the death of a grandson of Islam's Prophet Muhammad.