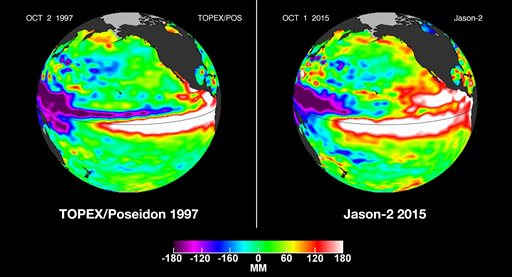 2015 tropical cyclone season is supercharged due to the combined impact of natural climate cycles, global warming and El Niño Southern Oscillation (ENSO). The records of 21 hurricanes and typhoons have shattered the previous records. The Central Weather Bureau just released a warning for the upcoming typhoon number 26. On October 21, the National Oceanic and Atmospheric Administration (NOAA) released their research data which stated September 2015 was the warmest such month for Planet Earth since such data began in 1880. El Niño only worsens the effect of global warming on various countries.

El Niño, an irregular periodic climate change caused by variations in sea surface temperature over the tropical eastern Pacific Ocean, provided storms and typhoon with a sufficient amount of fuel in the form of warm ocean waters across the tropical Pacific. A research scientist at Colorado State University Philip Klotzbach said that the Accumulated Cyclone Energy (ACE), an index that measures both a storm’s intensity and its lifespan, has indicated that the index across parts of the Pacific is off the charts. El Niño of the year 2015 is believed to be the strongest ever recorded.

“Whether El Niño gets slightly stronger or a little weaker is not statistically significant now. This baby is too big to fail. October sea level height anomalies show that 2015 is as big or bigger in heat content than 1997. Over North America, this winter will definitely not be normal. However, the climatic events of the past decade make ‘normal’ difficult to define,” said a climatologist at NASA’s Jet Propulsion Laboratory, Bill Patzert.

In 2015, El Niño has made Singapore suffered from hazardous haze, drought in California, reduction in milk production in Argentina, and alarming low water levels in Vietnamese coffee beans farmers’ reservoirs. El Niño will continue to affect the climate until the beginning of 2016, which deeply affects the price of Colombian coffee beans, air pollution and the livelihood of deep sea fish. Natioanl Center for Atmospheric Research (NCAR) warns against large scales and catastrophic droughts and floods if the governments are unaware of the capabilities of El Niño. World Weather has pointed out that the tea production in Kenya is estimated to drop by 10%, while the cocoa and coffee production in South Sumatra and Java, Indonesia will be affected by El Niño.

NCAR said between 1997 and 1998, the El Niño was as powerful as the 2015 El Niño. At the time, the droughts, and other disasters have killed at least 30,000 people and which cost US$100 billions of economic loss in U.S. Although it could severely damage some countries’ agriculture output, the rich rainfalls could generate a bountiful harvest in 2016.

As a study of Journal Science Advances has stated, El Niño-La Niña cycles will become stronger and more common within this century due to global warming. Climate change is inevitable.