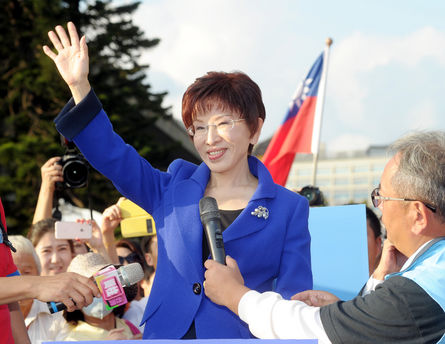 TAIPEI (Taiwan News) – Former Kuomintang presidential candidate Hung Hsiu-chu said Thursday she would start giving back a total of NT$11.83 million (US$364,000) in political donations to the donors.
The KMT replaced her as its candidate for the January 16 election with its chairman, Eric Liluan Chu, just last weekend, putting her in a difficult position.
Hung said that she would repay the 2,633 sums of money which she had received from known donors since September 23. However, there was no way of returning anonymous donations or funds contributed before September 23, her office said in a statement. The law did not allow the return of that money, and most of it had been spent during the campaign already anyway, the statement said.
After the KMT revoked Hung’s candidacy on October 17, the campaign closed down its online donation function and informed the banks that it would no longer accept money.
Hung’s office said the situation was unprecedented since no party had ever changed candidate in mid-course, causing both the campaign and the banks to figure out how to solve the donation problem in a legal way.
The office said it was still working on a way to resolve the situation. Supporters who had paid for campaign souvenirs would receive their money back but would still be sent the souvenirs.
At the end of her campaign, Hung fell in the opinion polls to a level about 30 percent behind frontrunner Democratic Progressive Party Chairwoman Tsai Ing-wen. In a more recent survey, Chu was still 17 percent behind the opposition leader.
Legislative Speaker Wang Jin-pyng said Thursday that Chu was 500,000 votes behind Tsai, but if all KMT members continued to promote him, he could make up the difference and win on January 16.