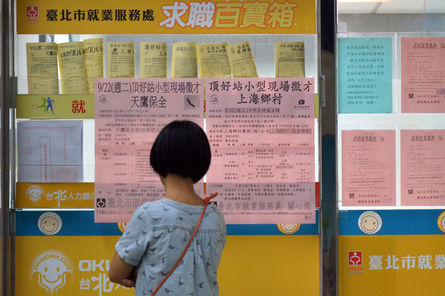 Unemployment rate lowest for Sept. since 2000

Unemployment rate in Taiwan continues to experience month-over-month improvements and is seeing the lowest September rates since 2000, according to data released Thursday.

In September, the unemployment rate fell slightly to 3.89 percent, the lowest level for the month in 15 years, down 0.01 percentage point from August.

The average jobless rate for the first 9 months of this year was 3.74 percent, the lowest level recorded in 15 years.

The latest unemployment figures for neighboring countries: Japan registered 3.4% while unemployment stood at 3.3% in Hong Kong, 3.6% in South Korea and 2.0% in Singapore (2.8% among residents). Taiwan ranked the worst among the Asian Tigers. Over the past few years Taiwan has ranked at the bottom compared to its neighbors in many economic indicators and in wages.