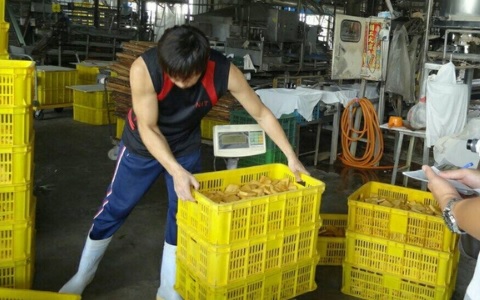 According to the FDA, results of the tainted products manufactured and distributed by Li-Chen Foods in Pingtung County failed to pass safety regulations after samples of pressed tofu were randomly picked up last Thursday pending laboratory tests.

The Monday bust, comprised of health authorities and police from the municipal government, found six barrels of hydrogen peroxide at the factory complex weighing 1,350 kilograms in total.

Preservative agents or H2O2, are commonly used by merchants as insecticide (and bleach), authorities said, urging consumers to purchase products kept in cold storage since those kept at room temperature are more likely to be laced with preservatives due to their higher susceptibility to bacterial contamination.

Excessive consumption of the substance can irritate the digestive system, cause nausea and skin rash, according to the FDA.

The Tsai brothers, owners of Li-Chen, confessed to investigators who conducted the preliminary questioning that they have been supplying tainted bean curds to traditional markets in Pingtung County for five to six years, where each batch weighing 200kg-worth of tofu were delivered two to three times a week.

The owners also revealed that their produce could fetch between NT$18 to NT$19 per catty (0.6kg).

The remaining stocks of bean curds found in the factory have since been confiscated, along with the six barrels of chemical additives set to be destroyed.

The violators are to be fined between NT$60,000 and NT$200 million (US$2,000 and US$6.7 million) in accordance with Article 15 of the Act Governing Food Safety and Sanitation, where the Tsai brothers are also likely to face seven-year imprisonment.