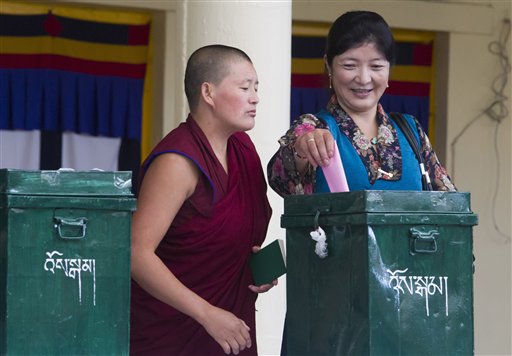 TAIPEI, Taiwan (AP) — Taiwan's ruling Nationalist Party dumped its unpopular presidential candidate on Saturday, in hopes that her replacement will revive the party's fortunes three months before an election that the pro-independence opposition is heavily favored to win.

Chu, the mayor of suburban New Taipei City and a former accounting professor, had earlier declined to seek the nomination. But upon accepting it on Saturday, he said the election was too important not to step in.

Hung had resisted stepping down as the party's candidate, but said she accepted the decision and would remain loyal to the party.

The Nationalists have lost favor over their pro-China policies, and Hung was running about 20 percentage points behind Democratic Progressive Party candidate Tsai Ing-wen, who advocates greater caution in relations with Beijing.

While the presidency remains in doubt, a more popular candidate could help the Nationalists retain their majority in Taiwan's 113-seat parliament.

However, the veteran legislator and former teacher was seen as lacking in executive experience and had focused much of her campaign on the party's already embattled China policy. Chu is seen as relatively more moderate on cross-Taiwan Strait relations while maintaining friendly ties with the mainland's ruling Communist Party.

A win for Tsai would throw up new questions about Taiwan's relations with Beijing, which claims the island as its own territory to be reunited with the mainland, by force if necessary. Despite that threat, China is now Taiwan's biggest trading partner and a growing source of tourism and investment.

Talks between the sides have been based on the Nationalists' acceding to Beijing's demand that Taiwan and China be seen as part of the same country, something the DPP has refused to do.

While the DPP officially advocates Taiwan's formal split from China, it has pledged to adhere to the will of the majority of Taiwanese, who favor maintaining the status quo of de facto independence.

China took a hard line against the last DPP president, Chen Shui-bian, who served from 2000 to 2008. Its approach softened radically under current Nationalist President Ma Ying-jeou, who is constitutionally barred from seeking a third four-year term.

Ma's government signed 23 agreements with China to promote investment, tourism and trade, helping to reduce tensions between the sides to their lowest level in more than six decades.

Although welcomed by the business community, the agreements incurred a backlash from younger Taiwanese. Tens of thousands protested in Taipei last year against the deals, saying they'd been rushed through without adequate consultation.

Along with harming their economic prospects, the deals were opposed out of fear they will eventually give China political control over the island.

A former Japanese colony, Taiwan split from the mainland in 1949 when the Nationalists, led by Chiang Kai-sheck, moved their government here following defeat to Mao Zedong's Communists in the Chinese civil war.