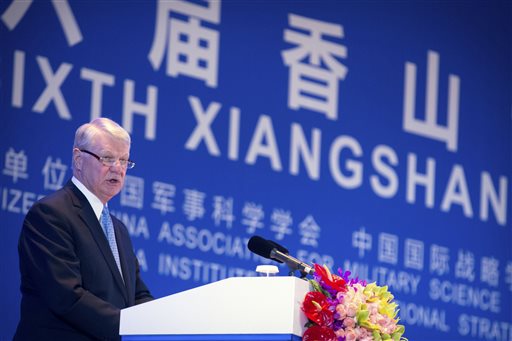 BEIJING (AP) — A top Chinese general said Saturday that China's newly created islands in the disputed South China Sea are intended mainly to aid shipping and dismissed concerns that Beijing is seeking to strengthen its control over the strategically vital region.

General Fan Changlong's remarks came as expectations grow that the U.S. might directly challenge Chinese claims in the South China Sea by sailing a Navy ship inside the 12-nautical mile (21-kilometer) territorial limit surrounding one of the man-made islands.

Concerns have been growing over the rapid appearance of islands created by piling sand atop reefs and atolls controlled by China, which is now adding, harbors, air strips and large buildings. The U.S. and others have called on Beijing to halt those projects, saying they are destabilizing an increasingly militarized region.

Fan said concerns that the island construction could affect freedom of navigation were unfounded.

China's assurances have failed to gain much traction abroad, and speaking shortly after Fan, Admiral Gary Roughead, the former U.S. Chief of Naval Operations, said the rapid expansion of the islands and a lack of clarity from Beijing "heightens suspicions and presents the potential for miscalculations."

While Beijing's assurances are welcomed, confidence measures and increased transparency are needed to assuage China's neighbors of its peaceful intent, Roughead said.

Fan cited the recent launch of operations by two new lighthouses on Chinese island holdings as evidence of good intentions and said Beijing was committed to resolving disputes peacefully.

"We will never recklessly resort to the use of force, even on issues bearing upon sovereignty, and have done our utmost to avoid unexpected conflicts, said the general, a vice chairman of the powerful commission controlling the military that is headed by President Xi Jinping.

Fan also said China would accelerate the establishment of an 8,000-member stand-by force for U.N. peacekeeping missions promised by Xi at the United Nations last month, as well as a commitment to train 2,000 foreign peacekeepers over the next five years.

China will also pursue expanded military cooperation with the 10 members of the Association of Southeast Asian States, whose defense ministers it hosted at a forum in Beijing on Friday.

That includes exploring the possibility of establishing hotlines and exchanging liaison officers between their militaries, Fan said.

The ASEAN meeting and Xiangshan Forum are part of an effort by China's military to burnish its reputation in a region wary of Beijing's territorial ambitions. Four of the ASEAN countries have claims to seas and islands in the South China Sea that clash with Beijing's own.

ASEAN member Philippines on Wednesday gave strong backing for such a move.

Sailing within the boundary would mark the first time the U.S. has directly challenged China's territorial claims since 2012 and reinforce Washington's assertion that land reclamation does not add sovereign territory.

China has also sparred with Vietnam, another ASEAN member, over ownership of the Paracel island group, leading to a confrontation last year when Beijing moved a massive oil drilling platform into contested waters.

On Thursday, Vietnam accused China of sinking one of its fishing boats near the disputed islands. The incident was apparently motivated by a desire to steal the ship's catch of fish and put it out of commission. There was no evidence that any Chinese government ships were involved, although Beijing's aggressive actions are believed to embolden Chinese fishermen in the area.

China's military, especially its navy, is gathering formidable capabilities, fueled by large annual increases in the military budget, which is now the world's largest behind the U.S.

China is adding new ships and submarines at a rapid pace, and its first aircraft carrier will soon become operational. Meanwhile, a massive military parade in Beijing last month showcased new missiles permitting China to hit targets — including U.S. Navy ships and bases — throughout the region.

Along with claiming almost all of the South China Sea's island groups and crucial sea lanes, China is dueling with Japan over ownership of an uninhabited chain of islands north of Taiwan, and in late 2013 declared an air defense zone that would theoretically give it control of aviation over much of the East China Sea. Many analysts believe China is now considering declaring a similar zone over the South China Sea.