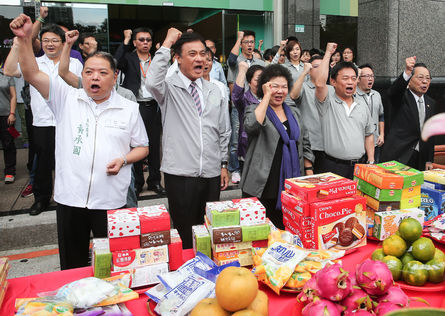 No plans to run as Tsai’s running mate: Chen Chu

Tsai’s national campaign headquarters was inaugurated in Taipei Sunday, as the DPP has rented the first, second, 13th and 14th floors of the Huitai Building, near its headquarters on Beiping E Road in Taipei.

When asked if she was planning to run beside Tsai next January, Chu said she has no intention to do so as she was re-elected in the local elections last year, affirming that she will fulfill her duties as campaign manager and Kaohsiung mayor.

“Tsai’s running mate will be someone who is capable of assisting her after she is elected,” she confirmed.

Office staff, including campaign director-general Su Jia-chyuan, executive director Lin Hsi-yao and candidate office director Lin Mei-chu were present at the inaugural ceremony in which prayers and fruit baskets were offered to the Gods.

A large-scale piggy bank used to raise funds from supporters for the current campaign was also unveiled.

The first floor of Tsai’s national campaign headquarters will be used as the main office, which has been decorated with a large photograph of Tsai, a nine-screen TV wall and a cross-section of the Central Mountain range built out of piggy banks, reports said.