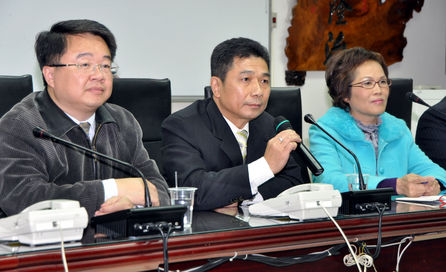 The Democratic Progressive Party called for Kuomintang Chairman Eric Chu to make a formal apology to residents in New Taipei, urging him to resign as the city’s mayor before running for president, reports said Sunday.

DPP New Taipei City Councilor Cheng Jhi-long made the comment on behalf of his counterparts during an open press conference in the morning in which he criticized Chu for breaking the promise not to run next January 16.

“We demand that Chu relinquish his position as mayor and that he make a formal apology to residents in New Taipei,” he called.

The question whether Chu will stay on as mayor during the campaign has yet to be confirmed. However, the DPP councilor was not short to condemn him for hugging three job descriptions simultaneously – as KMT chairman, New Taipei mayor, and presidential contender.

“Chu deliberately deceived the public as he lied about sitting out his term as mayor.”

On Saturday, the special Kuomintang congress named Chu by acclamation as its new presidential candidate after a vote to replace its original candidate, Deputy Legislative Speaker Hung Hsiu-chu passed the majority.

The KMT chairman and New Taipei mayor proclaimed that he has had to come out to protect the integrity of the Republic of China, as cross-strait peace could be lost in the hands of the DPP, reports said.