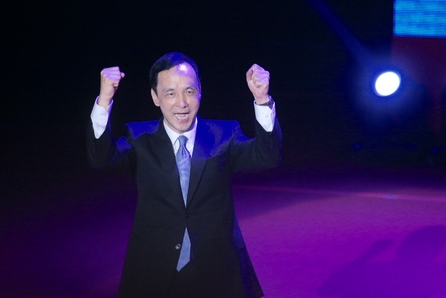 TAIPEI (Taiwan News) – The special Kuomintang congress named party chairman Eric Liluan Chu by acclamation as its new presidential candidate Saturday after a vote to replace its original candidate, Legislative Vice Speaker Hung Hsiu-chu.
There were no votes to be counted, as the seven-member group in charge of the congress asked supporters of Chu’s nomination to rise and clap their hands, which most of them seemed to be doing.
During an earlier phase of the congress at the Sun Yat-sen Memorial Hall Saturday afternoon, 812 out of 891 delegates voted in favor of removing Hung from the party ticket for the January 16 election.
The congress decisions completed a process which started barely two weeks earlier, when a member of the KMT Central Standing Committee announced he would file a motion asking for the replacement of Hung as candidate.
She had been performing poorly in opinion polls, rating only 15 percent sometimes, or as much as 30 percent behind opposition Democratic Progressive Party Chairwoman Tsai Ing-wen.
Candidates for the legislative election, also on January 16, reported back to party headquarters that they would lose in a big way if Hung stayed on as the presidential candidate. Chu is expected to be able to win more votes for the Legislative Yuan, where the KMT could face a loss of its absolute majority for the first time ever.
In his closing address to the congress, Chu apologized to Hung and to the people of New Taipei City, while again lashing out at the DPP.
“We rearranged our steps, we start over again,” he began. “Where the people are, the KMT is there, where the people are, our future is there.”
He also alluded to his re-election as mayor of New Taipei City last November 29, when he promised to sit out his term, which ends in December 2018. He apologized to the residents of his city, but he added he had to report to all Taiwanese including the people of New Taipei, that he had to come out and protect Taiwan’s healthy democracy.
He again apologized to Hung and her supporters, while emphasizing the need for solidarity and praising them for their participation in the election process.
The newly anointed KMT presidential candidate lashed out at the DPP, questioning Tsai’s commitment to harmonious relations with China.
“What we could lose is not an election, what we could lose is the Republic of China, what we could lose is cross-straits peace,” Chu said.
Looking at policies, he said that if elected president, he would deliver an annual state-of-the-nation address to the Legislative Yuan and face questioning by lawmakers, while giving lawmakers the right to vote on his Cabinet.
The question remains whether Chu will stay on as mayor of New Taipei City during the campaign. A resignation, as demanded by the opposition and apparently supported by 66 percent of residents, according to a TVBS poll, would trigger a new by-election for mayor of Taiwan’s most populous city within three months.
Early opinion polls in the days leading up the congress also gave Chu barely better results than Hung, with Tsai staying above 40 percent, Chu at about 21 percent, and People First Party Chairman James Soong at around 12 percent, depending on the poll.
Next, attention is likely to focus on the choices of running mates. None of the presidential contenders has yet announced a vice-presidential candidate.