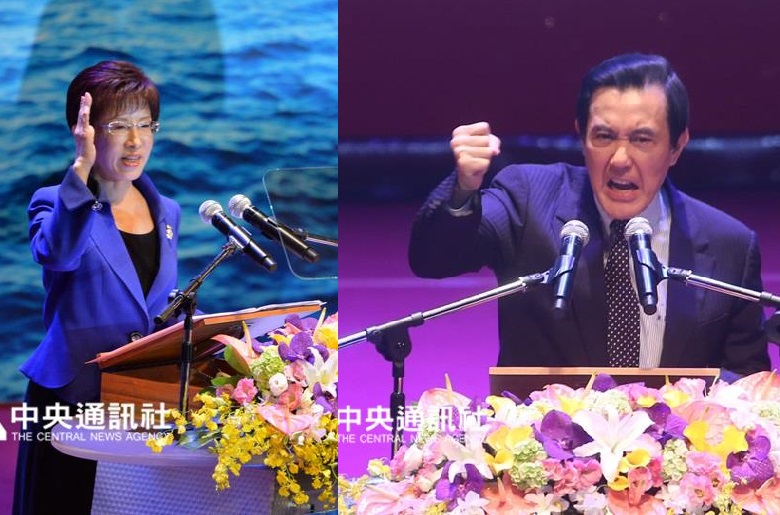 TAIPEI (Taiwan News) – President Ma Ying-jeou opened the special Kuomintang congress Saturday with a strong call for unity, saying the party would lose if it was divided.
The main topic at the meeting was the eventual replacement of Legislative Vice Speaker Hung Hsiu-chu as presidential candidate by party chairman Eric Liluan Chu.
The aim of the congress was to find a consensus and solidarity, Ma said. He reminded his audience about the 2000 election when the KMT became an opposition party for the first time ever. Independent candidate James Soong split the KMT camp, allowing the opposition Democratic Progressive Party to win.
Hung, who was seated in the first row next to Ma’s empty seat, did not applaud with the crowd for his speech, camera footage showed.
As soon as the president finished, it was Hung’s turn to take the podium. “I don’t know whether some minutes from now, my status will change, but what will not change, are my loyalty to the party and to the country,” she said.
Hung emphasized how she had been the only candidate to step forward and take part in the KMT candidate selection process, resulting in her July 19 nomination. She rejected the accusations that she had veered too far from the party’s stance on cross-straits relations, but reiterated her support for a peace accord with China.
Hung said she didn’t believe the congress would become known as the meeting which replaced her, but as the meeting where she found support with delegates. She described herself as an eternal KMT member, and called on the party to make its members proud and to move forward on cross-straits issues.
“The party has the possibility not to want me, but Hsiu-chu does not have the choice not to want the party,” she concluded her speech.
Hung left the main hall of the congress after her appearance, leaving her seat empty.
A total of 1,607 delegates had the right to attend the congress, and if about 80 percent showed up, at least 720 would be needed for a majority to approve her replacement.
After an hour of speeches, the agenda featured the motion to revoke the candidate, a special Central Standing Committee session to put forward a new candidate, and then the approval of the new candidate by the full congress with a closing speech.
The whole affair was expected to be concluded by 5 p.m.