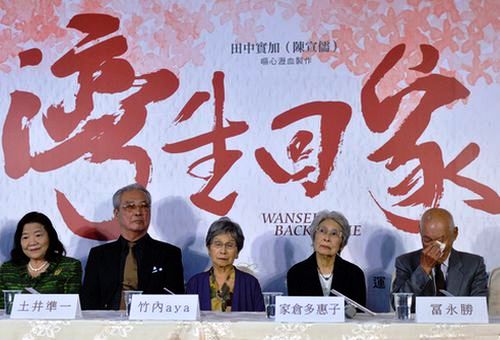 Few Taiwanese are familiar with the stories of Japanese people who were born and raised in Taiwan and deported to Japan after the end of the Second World War.

But a book and recently-released documentary "Wansei Back Home," may change that.

"Wansei" is the Japanese term used to refer to the descendants of Japanese colonials in Taiwan. Between 1895 and 1946, there were thousands of "Wanseis" in Taiwan and almost all of them were deported to Japan after the colonial ruler lost the war.

In 2014, Japan-born Chen Hsuan-ju, also known by her Japanese name Mika Tanaka, published the book "Wan Sheng Hui Jia" (Wanseis Return Home), which documents buried stories of some "Wanseis" during their years living in eastern Taiwan's Hualien, as well as their lives as discriminated strangers in their own country after they returned to Japan.

A descendant of a "Wansei" family that had lived in Hualien, Chen said that she was determined since several years ago to document the stories of the social outcast.

After 12 years of efforts, she managed to compile the stories of the "Wanseis" and this year turned it into a documentary film.

Ahead of the film's premiere in Taiwan on Friday, Chen, writer and also director of the documentary, invited two of the "Wanseis," Taeko lekura and Yuji Miura, to join her in coming to Taiwan to attend the premiere. The two "Wanseis," both in their 80s, were excited to have the opportunity to visit Taiwan which they considered home before being deported, according to Chen.

"Because I understood the pain of separation, it made me want to bring the elderly Wansei back to Taiwan, to see what in their hearts was home," Chen said.

She was speaking at an exclusive screening of her documentary organized by the Hualien City Government.

Hualien Magistrate Tien Chih-hsuan, who was attending the premiere, spoke of the significance of showing the documentary.

"Wanseis are a part of Taiwan's history that cannot be removed. Carrying the pain of war, these little ones' destinies were forever twisted. To understand ourselves, we must recognize historical truths and prevent mistakes from being repeated," Tien said.

"Through this documentary, everyone can understand Taiwan, and this period of history in Hualien."

The document has received recognition at the Golden Horse Film Festival in Taiwan.