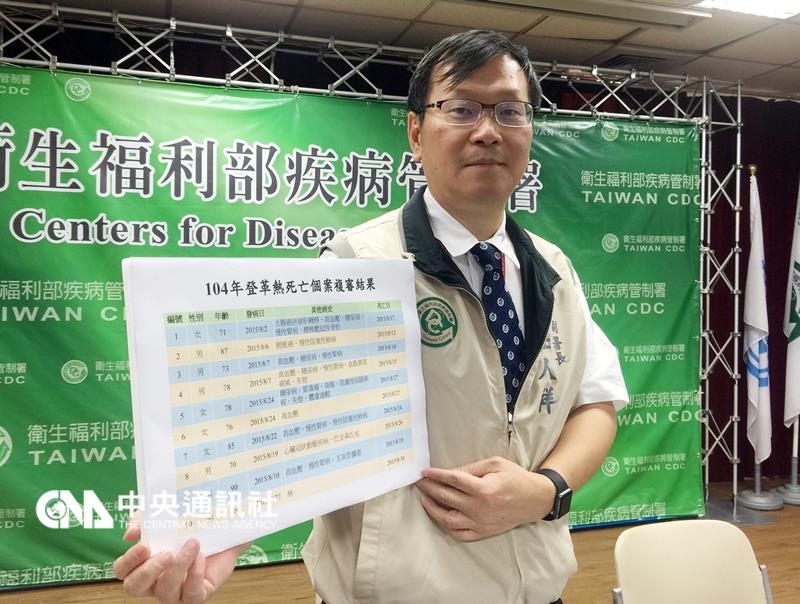 The number of reported deaths caused by dengue fever has been confirmed to reach 106 since the beginning of summer, Taiwan’s Centers for Disease Control (CDC) said Wednesday.

Amongst the deceased, 90 were from Tainan, 14 from Kaohsiung, and two from Pingtung, whereas the oldest casualty was a 77-year-old male who also suffered from other chronic illnesses.

CDC Deputy Director-General Chuang Jen-hsiang said the 17 deaths initially awaiting clarification earlier this week have been confirmed, of which 10 were males and 7 females.

“The majority of victims also showed signs of chronic illnesses, including hypertension, diabetes, coronary artery and kidney diseases,” he said, adding that people suffering from the said diseases have been categorized by the World Health Organization (WHO) as those most vulnerable to dengue fever fatality.

As of Tuesday, the number of dengue fever contracts reached 23,821 nationwide, of which 19,621 came from residents in Tainan, the CDC said. However, amongst those having been infected by the mosquito-borne disease, a recorded 21,260 or 89.2 percent of patients have fully recovered.

The city of Tainan recorded 200 new cases of dengue patients on Tuesday, down by 77 from the previous day, health authorities said.