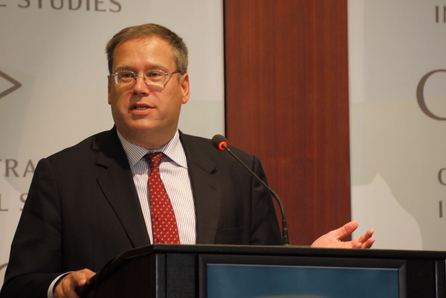 Taiwan should take the time to review and reflect on the guidelines imposed by the free trade agreement (FTA) for a prerequisite to the entry requirements of the Trans-Pacific Partnership (TPP), Kurt Tong said Wednesday, principal deputy assistant secretary for the State Department's Bureau of Economic and Business Affairs.

The Trans-Pacific Partnership (TPP) is a proposed trade agreement between twelve Pacific Rim countries concerning a variety of matters of economic policy. Implementing the TPP has been one of the trade agenda goals of the Obama administration in the United States, according to Tong.

“The U.S. government hopes to set a high standard of global trade through the implemented TPP framework.”

When asked why China was not a member of the U.S.-led trade bloc given its status as the world’s second largest economy, Tong said transparency is the key to joining the TPP, a qualification in which China currently lacks.

“Even if it shows the intention to join, China would first need to show more efforts made through bilateral investment treaty (BIT),” he added.

Taiwan’s participation in the trade pact would be tantamount to several economic cooperation agreements, securing an opportunity for fair competition and creating broader foreign trade horizons for the nation, according to Executive Yuan spokesperson Sun Lih-chyun.

Regarding Taiwan’s resolution to join the second round of negotiations and gain access to the free-trade agreement, Tong said the island could do more to demonstrate trade transparency, a similar suggestion in which the U.S. has given to China.

The deputy assistant secretary however did not mention the subject of U.S. pork imports, which Taiwan currently prohibits as they contain traces of ractopamine, a feed additive to promote leanness in animals that is banned in Taiwan.

The 12 TPP member states include Australia, Brunei, Canada, Chile, Japan, Malaysia, Mexico, New Zealand, Peru, Singapore, the US and Vietnam, all of which are important trade partners for Taiwan, Sun said.