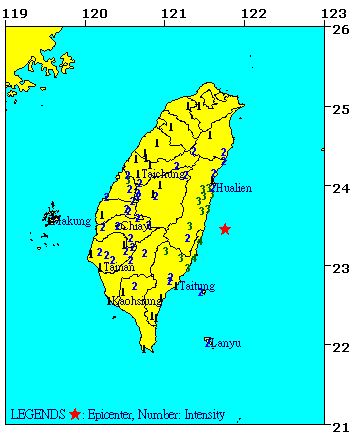 An earthquake with a magnitude of 5.5 jolted Taiwan at 7:49 p.m. Tuesday, according to the Central Weather Bureau.

The quake's epicenter was located at sea, about 61.3 kilometers southeast of Hualien County Hall, at a depth of 42.2 km, bureau officials said.

The earthquake's intensity, which gauges the actual effect of a temblor, was highest in Changbin Township in the southeastern county of Taitung where an intensity of 4 was recorded, while Changhua City in central Taiwan recorded an intensity of 3.

It was also felt in Hualien City, Hehuanshan in Nantou County and Techi in Taichung, central Taiwan, Alishan in Chiayi County and Tauyuan District of Kaohsiung in southern Taiwan, as well as in Taitung City, where it had an intensity of 2, the bureau's Seismology Center said.

The earthquake was the sixth to rattle Taiwan with a magnitude larger than 3.5 on the Richter scale over the past three days. No damage to property had been reported so far around the island.