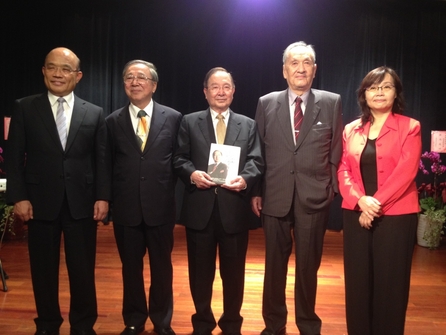 Wu Li-pei, the former advisor to the then-president Chen Shui-bian, has launched a memoir covering his years in Taiwan as a young and poor bank teller, and in the United States as a remarkable banker with a myriad of accomplishments, who returned home and became an influencer in Taiwan’s politics and history. To this day, Wu’s story has been widely shared on social media for his legendary life story, who was born in a rich family but his father lost most of fortune for some reasons associated with the Taiwan 228 incident. Wu's family was traumatized by terror and grief since then. In his early 20s, Wu was enlightened by his NTU professor and classmates in the field of politics. After receiving his Bachelor's degree in Economics from the National Taiwan University (NTU), he took a teaching job for one year, and then moved on to become a bank teller at the Chang Hwa Bank (CHB) for seven years. He consequently left CHB for the U.S. to pursue advanced education at the age of 34. Within seven years of his graduation, he was promoted rapidly, where he began his career Stateside as a financial analyst. Although he struggled with English, his determination and business acumen soon landed him important position in Alaska's largest financial institution - the National Bank of Alaska. In 1982, Wu took the helm of General Bank in Los Angeles. Under his leadership, both General Bank and its holding company, GBC Bancorp, developed into industry leaders. In 2004, a House representative praised Wu for having fulfilled accomplishments that go far beyond the business world. By honoring Wu, the congressman described him as a man who has dedicated his time and energy to advocate democracy and human rights in Taiwan, as well as being the founder and chairman of the Formosa Foundation, a non-profit, non-partisan public interest group that seeks to foster an environment of peace and stability across the Taiwan Strait, while also promoting understanding and friendship between Taiwan and the United States. Wu returned to Taiwan in 2004 and renounced his U.S. citizenship as a symbolic act to strengthen his Taiwanese identity and, today, he is a well-respected democracy activist. The memoir comes with six episodes: First, a depiction of the adversity he endured during childhood; second, his survival in the U.S.; third, his twenty years with the Grand Commercial Bank; fourth, his care for Taiwan despite living in the U.S.; fifth his return home; sixth, his involvement in the Taiwanese political circle. Wu’s book launch press conference held Monday was attended by several political heavyweights, including former premier Su Tseng-chang, National Taiwan University (NTU) professor Peng Ming-min, and professor Li Hong-his. The event attracted widespread media attention.