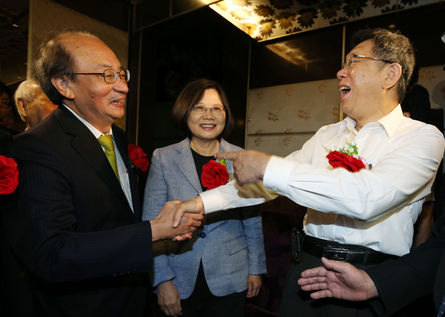 Tsai: future of Taiwan is for people to decide

The future of Taiwan is a decision to be made by its people rather than external forces, Democratic Progressive Party presidential candidate Tsai Ing-wen said on Sunday.

Her comments came in response to President Ma Ying-jeou’s National Day speech in which he said the status quo is nothing without the so-called “1992 Consensus.”

“Only the people can decide on which direction the future government should take,” she said during an autumn festival gathering hosted by the Taipei city government, adding that Ma has distanced himself from the wishes of the people as a result of his closed-door policies.

Tsai also pointed out that majority of the public have long expressed their dissatisfaction over Ma’s seven years of administration, as shown in various opinion polls conducted by the nation’s public agencies.

“The presidential election is only few months from now. We will let the people decide who should govern,” she said.

When asked about her reluctance to sing the words “our party” during the national anthem of the Republic of China on Saturday, Tsai said the local media has blown this non-issue out of proportion, and that the attention should instead be directed towards the nation’s solidarity and efforts to stay united.

Again asked if she would opt to change the lyrics of the national anthem if elected, the presidential contender said there are more important matters at hand, and that the anthem issue never crossed her mind.

Tsai's attendance at the National Day celebrations came at a time when the Kuomintang is embroiled in internal disarray over the party’s presidential candidacy. Her every move at the event has come under the media spotlight as she appears to be a virtual shoo-in to win the presidential race on January 16 next year.