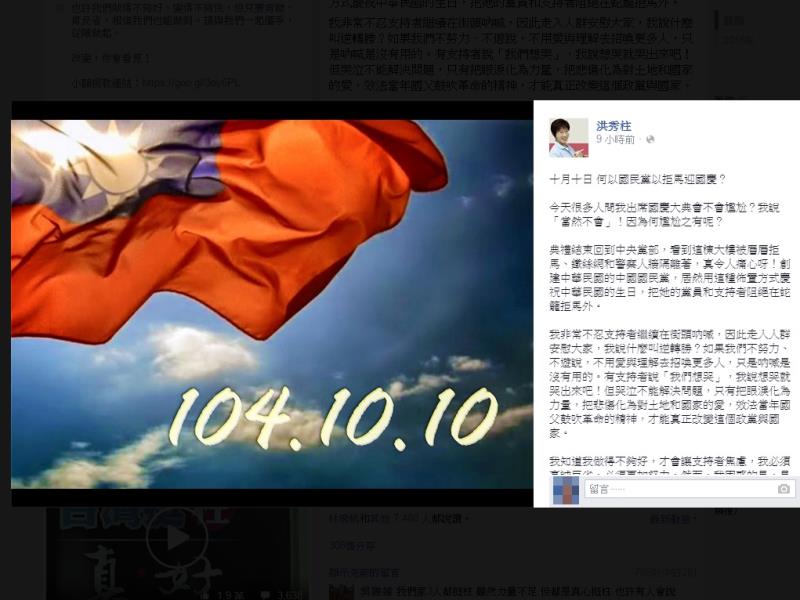 “It’s depressing to know that they were used to mark the anniversary of the Republic of China,” Hung quoted on social media.

The National day celebration was marked by a parade hosted by the nation’s Armed Forces and various civic and academic groups. Following the morning parade, hundreds of protesters marched to the KMT headquarters to voice their discontent against the party’s plan to remove Hung from candidacy.

“It was disheartening to see those barricades in the midst of our National day celebrations,” she said.

Hung, who joined the protestors outside the KMT building, thanked them for their staunch support while preaching the spirit of Sun Yat-sen, the founding father of the Republic of China.

“We should follow in the footsteps of our founding Father, whose fighting spirit and political revolution helped build the foundation of the R.O.C.,” she said.

On Facebook page, Hung quoted that she will defend her case regarding the party’s plan to have her candidacy replaced, and that she will not let her supporters down.

Responding to an earlier comment as to whether she felt awkward after attending the National Day celebrations alongside KMT Chairman Eric Chu, Hung said “of course not, why should it be?”