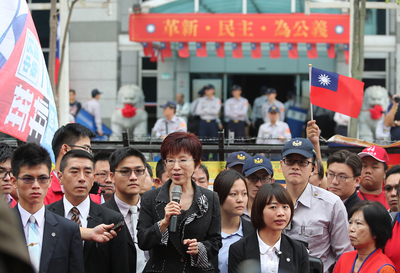 TAIPEI (Taiwan News) – Kuomintang presidential candidate Hung Hsiu-chu on Saturday invited her supporters to a rally later in the weekend, even though it was clear a KMT congress would replace her with chairman Eric Liluan Chu later this month.
While agreeing to have the special congress decide her fate as a candidate in the January 16 election, Hung has also insisted she wanted to defend her case and if possible, discuss her arguments with each congress delegate.
On her Facebook page Saturday, she invited 120 supporters to show up at her campaign headquarters Sunday evening to feel free to voice their opinions and interact with her.
Many supporters would be depressed at this stage and feel they had lots of questions on their mind, Hung said, adding she was also eager to talk and interact with them.
The event, dubbed a citizens’ plaza, would be broadcast live online and would be open to questions from the public at the site and online.
Hung attended the Double Ten National Day parade Saturday morning, where she was noted for sitting relatively alone just behind the three main party leaders, including Chu, and for receiving a warm hug from the First Lady.
Hung has seen her standings in the opinion polls fall from an initial more than 20 percent to figures around 15 percent or less, as Democratic Progressive Party Chairwoman Tsai Ing-wen saw her ratings grow from 35 percent to 45 percent or more depending on the survey.