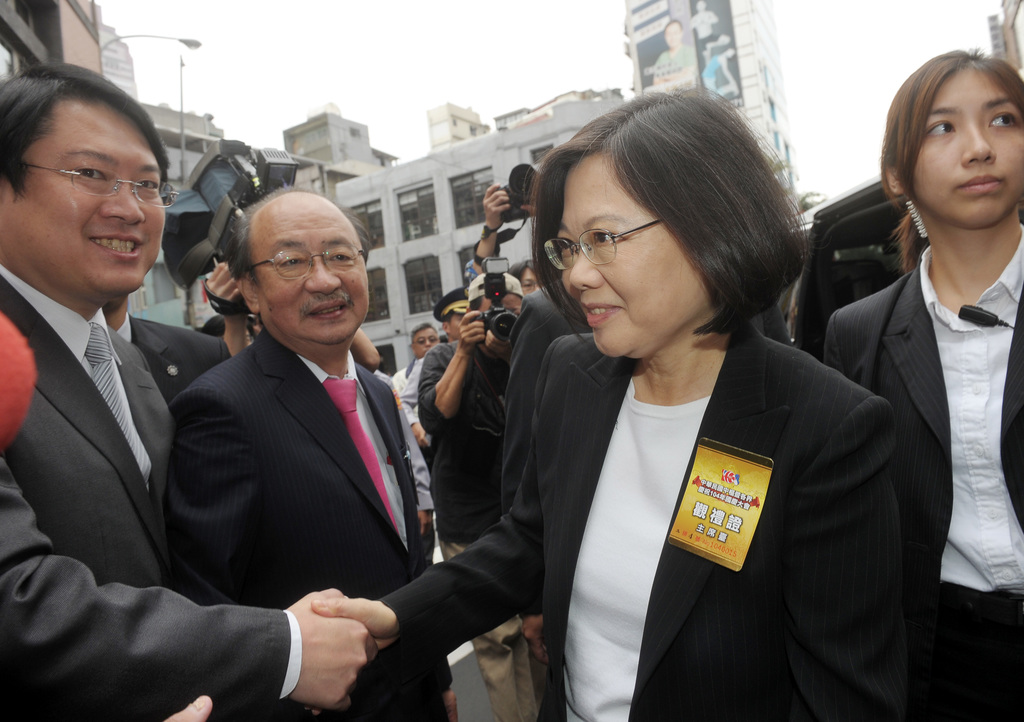 TAIPEI (Taiwan News) – Democratic Progressive Party Chairwoman Tsai Ing-wen came under close media scrutiny Saturday as she attended the Double Ten National Day celebrations for the first time in eight years.
Taiwan’s media were especially interested in her interaction with other, mostly Kuomintang, political heavyweights and in her attitude toward the national anthem.
Ever since President Ma Ying-jeou took office in 2008, the DPP leadership had stayed away from the official parades and banquets on October 10 in Taipei City. Tsai changed her mind this time because she wanted to emphasize harmony in the run-up to the January 16 presidential and legislative elections, which she is highly likely to win.
At Saturday morning’s parade, she was seated in the second row between KMT Chairman Eric Liluan Chu, who might soon turn into her rival in the presidential election, and People First Party Chairman James Soong, who is also running for president. The current official KMT presidential candidate, Legislative Vice Speaker Hung Hsiu-chu, was seated right behind Tsai. Chu and Tsai were frequently shown on camera footage to be chatting, while Soong was speaking to New Party Chairman Yok Mu-ming on his other side.
As Tsai left the scene in a car, reporters asked her whether she had been happy talking to Chu. She said she had also been talking quite happily to Soong. The PFP leader later said they had been exchanging experiences from previous Double Ten parades. It should be normal for party and government leaders to interact in such a relaxed manner, he added.
Chu said they had been talking about a wide variety of issues, including Tsai’s visit to Japan this week and the need for continued positive interaction between the parties instead of the past rather aggressive attitude from the opposition side.
When it came to singing the national anthem, Tsai sang along with the exception of a short passage which refers to “my party,” meaning the KMT. The opposition has often faulted the national flag and the national anthem for being too closely linked to the ruling party.
Chu said he had heard Tsai singing the anthem, but had not noticed any details.