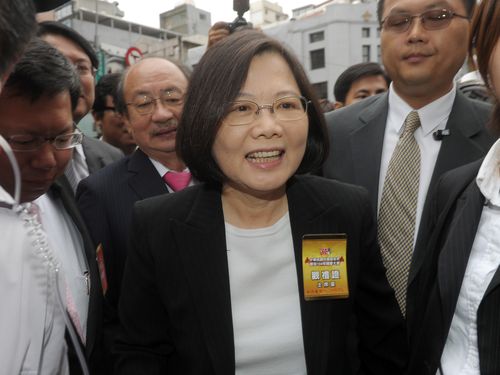 Tsai Ing-wen, chairwoman and presidential candidate of the opposition Democratic Progressive Party (DPP), said Saturday that she hopes it will no longer be an issue whether members of the opposition take part in Taiwan's National Day celebrations.

The people should stand together to protect Taiwan's democracy and freedom, she said, adding that she hopes the country will stay united however the presidential campaigns may develop.

Tsai made the comments to reporters as she and a group of DPP elected officials made their way to the plaza in front of the Presidential Office, where this year's National Day ceremony sill be held later in the morning. She is the first DPP chief to attend the central government's National Day ceremony since 2008, when President Ma Ying-jeou of the ruling Kuomintang began his first four-year term.

Tsai is the odds-on favorite to become Ma's successor in the presidential election to be held on Jan. 16, 2016.

Speaking to waiting reporters, Tsai said that Taiwan is facing a highly difficult environment that is full of internal and external challenges. This is a time when the nation should stand together and she hopes everyone will take part in National Day celebrations.