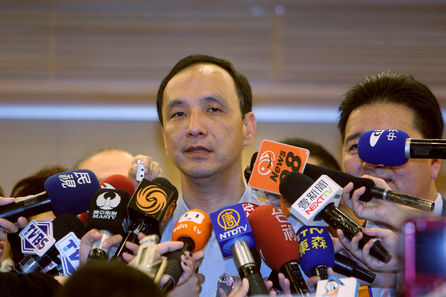 A ruling Kuomintang (KMT) official told the media Monday that KMT Chairman Eric Chu has twice urged the party's presidential candidate Hung Hsiu-chu to quit the race because her chance of winning the election is too small.

According to the Liberty Times and the United Daily News' reports, Hung, who is also deputy legislative speaker, refuses Chu's calls for her to step aside, the party's Central Standing Committee, which is due to meet Wednesday, will likely resolve to call a special party congress to nominate Chu, said the party official who declined to be named.

Rumors of Hung being forced out of the race have mounted as she trails front-runner Tsai Ing-wen of the Democratic Progressive Party by wide margins in the polls.

Some polls even have her behind James Soong, the chairman of the minor opposition People First Party.

Hung's campaign issued a terse statement in response to the latest development, saying "we know nothing about this but we will respect the party's presidential candidacy rules."

Hung later lashed out in a Facebook post at those who have been working to force her out of the race, asserting that they were "destroying the system and discrediting the party."

"No matter what the end results will be," Hung warned, "those suffering the most will be the party itself and those running (for legislative seats) on the KMT ticket."

According to the media reports, Chu's decision to take over Hung's responsibility was based on the party's internal polls that show he could launch a more viable campaign against the DPP's Tsai than other party heavyweights, such as Vice President Wu Den-yihor Legislative Speaker Wang Jin-pyng.

Even with Chu running on the KMT ticket, however, current polls indicate he trails Tsai by 10 percentage points and would still likely lose.

Chu's sudden interest in running after having vowed not to run when the KMT was going through its nomination process earlier this year is apparently aimed at bolstering the party's legislative election campaign to save the candidacies of incumbent lawmakers and prevent the KMT from becoming a marginal party in the Legislature, analysts said, according to the CNA.