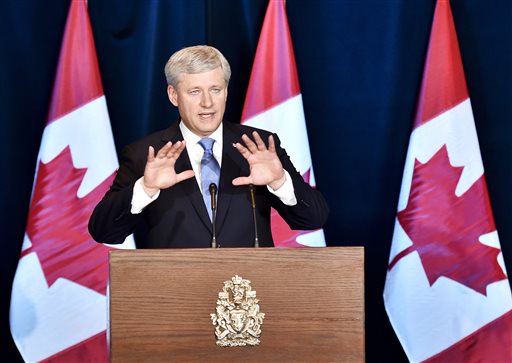 TORONTO (AP) — A former conservative premier of a Canadian province said Monday that Conservative Prime Minister Stephen Harper is "bad for the country" because some of his policies are borderline racist.

Ex-Newfoundland and Labrador Premier Danny Williams urged Conservatives not to vote for Harper, who has made the Islamic face veil a focus of the Oct. 19 election. Harper's government lost an attempt to ban the practice of wearing the niqab while swearing the citizenship oath. It lost an appeal Monday to have the decision delayed while it appeals to the Supreme Court.

Just two women out of more than 650,000 people have chosen not to proceed to the citizenship ceremony based on the requirement to remove their face coverings.

"Two women have been in that situation. Why is that a national issue?" Williams said in an interview with the Canadian Broadcast Corp.

The Harper government also said last week it would create a phone line for Canadians to report those engaged in "barbaric cultural practices" such as early and forced marriages. Opposition leaders have denounced injecting religion into the election campaign. Conservatives are "are playing with fire, and people are going to get hurt, Gerald Butts, a close adviser to opposition Liberal leader Justin Trudeau, tweeted last week..

Williams said Harper is pitting Canadians against each other and said the prime minister "doesn't care if he possibly crosses that racism line."

"It's all about getting elected at the end of the day. If that's the price we have to pay in order to have Stephen Harper as our prime minister then we should not vote for Stephen Harper," Williams said.

"If progressive conservatives out there like myself who feel they should vote conservative, and you can't vote Liberal or New Democrat, then don't vote for him, don't vote at all, because he's bad for the country."

Williams, an outspoken and popular provincial premier during his tenure from 2003 to 2010, previously had an issue with Harper over money for his province and urged people in Newfoundland to vote anybody but Conservative in the 2008 election. Not one Harper Conservative won re-election in the Atlantic coast province.

Polls say the Oct. 19 election is turning into a two-way race after being deadlocked three ways for a month. According to the CTV/Globe and Mail/Nanos Nightly Tracking Poll, the Liberals are at 35.6 percent, followed by the Conservatives at 31 percent. The New Democrats, whose base of support has tumbled in Quebec where the niqab issue is a hot topic, are at 22.9 percent. The margin of error for the survey of 1,200 respondents is 2.8 percentage points.