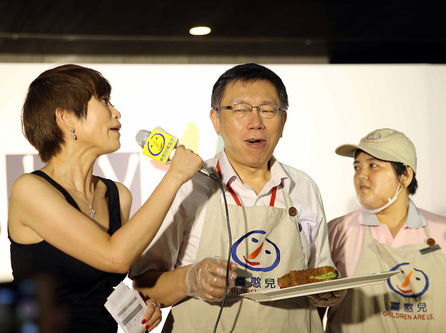 Taipei Mayor Ko Wen-je on Monday joined the Children Are Us Foundation for the opening of its newly-inaugurated “Enjoy Taipei Bakery” located on the first floor of the Taipei City Hall.

In the company of children with developmental disabilities, Ko learned to prepare smoked chicken panini sandwiches after which he tasted and joked that nothing would go wasted as he was wrapping some leftovers to go.

The foundation is a non-profit private organization (NPO) which provides long-term care and job training to people with Down Syndrome, cerebral palsy, multiple dysfunction and other mental illness. It works on changing people's general perception, hoping people can understand and respect people with intellectual disability, instead of making fun or looking down on them.

The first Children Are Us bakery opened in Kaohsiung city in 1997, and the Foundation has since expanded, opening other branches across the island. According to the city government, the management contract of the Taipei branch is renewed every three years, and for the last nine years it has gone to Victory Potential Development Center for the Disabled. On Monday, the foundation again renewed its contract after it has successfully won the bid to manage the Taipei store.

“The government can only do so much. It’s the private sector that can help propel its full potential,” Ko said in his inaugural speech, addressing the need to keep the non-profit bakery functioning for many years to come.

Based on his research, the mayor pointed out that Build-Operate-Transfer (BOT) projects from abroad have typically been related to educational and cultural purposes, whereas in Taiwan such projects are large-scale construction plans that benefit very little to society.

“We would need to devise plans for large corporations to play a bigger part in their social responsibility,” he said.

The foundation chairman Hsiao Shu-jen said the goal behind the bakery is to provide people with intellectual disability to be employed and earn a source of income.