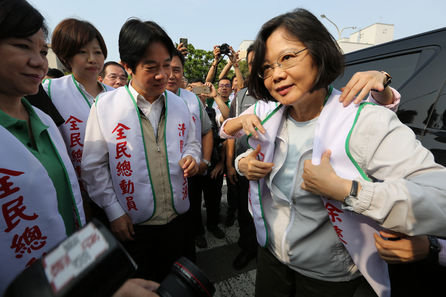 Tsai calls for end to speculations about Lai

Tsai’s response came during a visit to Taichung as part of her campaign trip over the weekend, where she was accompanied by DPP Taichung City Councilor Chen Shih-kai at a Mozi Temple in the city’s Longjing District.

Lai’s emphasis on his support for Taiwan Independence earlier this week led commentators to speculate whether he was trying to distance himself from Tsai’s advocacy of the status quo.

“The focus should instead be on the status quo and our policies toward peaceful cross-strait relations,” she said, noting that the DPP has already made clear to the public its political stance on numerous occasions and so there was no need to carry on with further speculative discussions.

Commenting on speculations that the KMT plans to remove Hung Hsiu-chu from the presidential candidacy, Tsai said it is an internal matter that remains within the pan-Blue camp, and so it was not up to her to express opinions about the speculative subject.

“The public is more concerned about campaign policies that will help drive the island’s future economy and well-being,” she said, adding that Taiwan is in desperate need for change.

“The question is not about who is running for presidency, but rather policies that will win the hearts and supports of the people.”

According to Saturday’s media reports, a Central Standing Committee (CSC) member Chiang Shuo-ping from the KMT will be filing a motion during party congress to discuss a replacement for Hung.

The CSC meeting is expected to be held on October 7, reports said, adding that there was no guarantee that the motion would be passed.